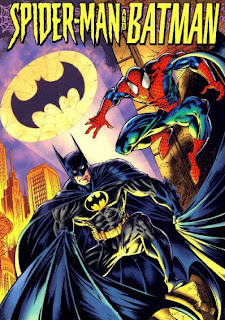 And the first shot has just been fired across the bow.

What does it mean? I don't know but I think it's a wonderful move on DC's part.

Supposedly, 2008 is due to be a MAJOR year for shake-ups within The DC and Marvel Universes.

The addition of longtime Marvel artist Mark Bagley to the DC talent roster sends a signal that 2008 will definitely be a year for change.

Speculation runs rampant as to whether or not DC intends to reboot a good portion of its universe next year and having the first artist to help launch the Ultimate Universe line sends a not-so-subtle message as to where DC may soon be headed with this soon.

A good move on DC's part, I think. I honestly can't wait to see where they're headed with this.

Comments:
That Batman/Spider Man crossover is one of my favorite single issues ever.

I think Bagley on Superman would be great -- and should end the Great Superman Scheduling Snafu once and for all.

I have to agree with Rob S. I think a Bagley sun on S-Man would probably be enough to make me want to start picking up the title again.

I usually buy a book for the writer, not the artist, but I think I'll pick up whatever book Bagley ends up on.

This is great news. I've been a Bag-fan since New Warriors, but I just can't bring myself to give Marvel money these days. Now I can get a fix.

I'd certainly be happy to follow a Busiek/Bagley Trinity weekly book...(which is where some of the rumor sites have him going...)