Contrary to what the cover may say, it was actually the beginning of the end.

Gunfire, The Sensational Character Find of 1993!

I know. I know. I can hardly believe he exists within The DC Universe, either.

Whatever you hate the most, you shall become. With DC Comics routinely getting handed its' ass on a monthly basis in The 90's, they decided to try and beat Marvel at their own game. Hence....

Introduced in Deathstroke, The Terminator Annual #2 (1993), after receiving the bite of an alien, Gunfire gained the abiliity to "charge" whatever he touches, turning it into an explosive weapon.

What a brave, brave GAMBIT, DC Comics. So very brave. 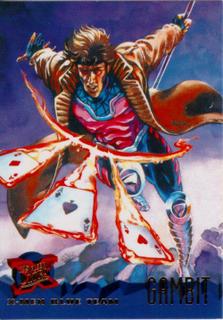 Since Marvel already has something like this dork, we at "Seven Hells!" would like to bypass the obvious and banish...I mean, donate him to...

Comments:
If I remember correctly, Gunfire didn't charge objects like Gambit, he turned the energy inside the object into a kind of lame generic energy blast until the object disolved. If I remember the cover of the annual he appeared in he's attacking the evil alien with a baseball.

Gunfire, Gunhawk... they're all good!

I eagerly await the new streamlined DCU, so series like Chase can live and series like Gunfire need not use up precious resources.

Me -- your friendly neighborhood Anonymous -- I'd never frickin' heard of the guy. I mean, I knew I got out of comics in the 90's, but I thought I at least kept my toe in the DC waters...

Apparently, I was asphyxiating way, way up above the surfline.

What happened to you in the 90's, DC? Whither the whimsy?

Whismy took two slugs in the noggin, bub, in a dirty alley behind a rancid-smell Chinese restaurant, and no complaints from you about it, see, or you get the same.

whoa someone other than I got deleted? wonder what he did...

And all I needed to know was Gunfire's name to see where this one was going. ick. Why does my computer screen smell like butt now?