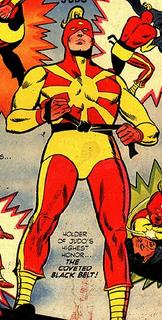 Oh! Clutch the pearls! It's Judomaster and from the way he's dressed, he's just returned from France where he was touring with Cirque Du Soleil.

You know how you go to a club and there's six people at a table. Five are beautiful and upon listening, you find them to be brilliant conversationalists but there's that one who ain't so beautiful. The one who answers everything in sighs and grunts. You ask yourself, "Who the hell let him or her in?" During DC's 80's acquisition of The Charlton line of characters, they took upon The Blue Beetle, Nightshade (Currently appearing in Day Of Vengeance), Captain Atom (Who's due to set The Wildstorm Universe on its' ear starting with November's Captain Atom: Armageddon),the enigmatic Question and... Judomaster.

He has the power to judo chop. So does Batman, Nightwing, Robin, Conner Hawke, Batgirl, Bronze Tiger, Black Canary, Karate Kid, Lady Shiva and most importantly, so does Richard Dragon, Kung-Fu Fighter. I like him somehow.

Marvel's Iron Fist could use a new sidekick, anyway.

Bye, Judomaster. Say "hey" to Space Cabby for me.

Comments:
I actually like Judomaster. An American who wears the Japanese flag during WWII, fighting a guerilla war against Axis, and crashing a plane in every issue. What's not to like?

But the Asian sidekick, "Tiger", stays.

I am certain I can find a place for him...

Hm. Who was the Watchmen Analog for Judomaster, anyhow? Hooded Justice, maybe?

Also, can this double as 64? I mean, surely you're also going to want to exile the Kingdom Come/Kingdom/Planet Krypton version of Judomaster II...

Jeff, I forgot about The KC Judomaster. Still, I have to get rid of the whole pig.

Not that you aren't making a convincing case for Master of Judo-Fu here, but still, he goes before Peacemaker? The man talks to himself, and yet isn't a Golden Age villain! Clearly Marvel material.