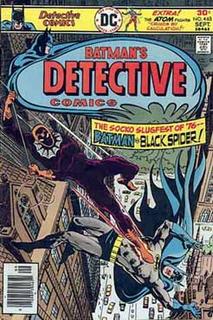 In 1976, Eric Needham got himself hooked on drugs. While strung-out on smack, his silly ass was too high to realize he was robbing his own father's liquor store. He COULD have known drugs were bad for him but it was four years too early for Nancy Reagan to create a "Just Say "No!" To Drugs" campaign.

Needless to say, he shot his own father. Oh, Protector! You were born too late!

So, he gets arrested and somehow CONVINCES HIMSELF IT WAS THE DRUG PUSHERS' FAULT FOR SELLING HIM THE DRUGS, CAUSING HIM, in effect, TO KILL HIS OWN FATHER.

Not him. The drug dealers.

Cocaine's a hell of a drug.

He cleans himself up, bulks up and begins to stockpile weapons upon his release from prison, vowing vengeance upon his father's killers. He dawns a Spider-Man-esque costume in order to lure Gotham's criminal element into the web of...THE BLACK SPIDER! "Sucking" hasn't been the same since.

Note to all future drug addicts, when and if you clean yourself up after shooting your father while on drugs, it is your fault. Not the drug dealers. Thinking like this says you should spend the rest of your life getting your ass kicked by someone like The Marvel Universe's Daredevil, not Batman. You don't deserve to be in a universe where The Protector and The Keebler Elves dwell. Kids, listen to The Protector... 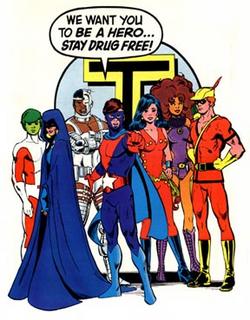 Comments:
Please don't tell me that "Black Spider" is also a black man...

He can be an archenemy to Speedy...!

(I know this post has little to do with the point of YOUR post, but indulge me!)

Dude! The Protector! I actually have that freebie comic book taht he appeared in. I remember when I was given the book by my Middle School, it was right about the time that Robin had quite the Teen Titans and I was SO SURE(!!) that The Protector was going to become a regualr character and be revealed to be Dick Grayson and this was going to be his new code-name. Oh well, I've never been accused of being the most prescient of comic book readers!

I feel a post on The Protector coming on.

Is this the same Spider guy that was recently killed in Gotham Central?

There've been atleast three different Black Spiders. I think the current one, as seen in "Identity Crisis" is Black.