This Is A Test! 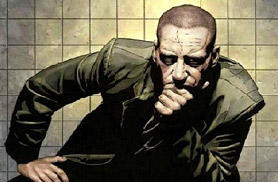 Test your knowledge by naming at least four DC characters who "cross" over to The Vertigo Universe on a regular basis.

Comments:
Hmmm. "Daniel" hasn't popped up in the DCU since Grant borrowed him for the JLA guest-shot (has he?), but I guess I could go with Swamp Thing, Zatanna, and Fury.

Should've been more specific: Grant Morrison had to get permission from Gaiman to use Daniel. Doesn't count if you have to ask for permission.

BTW, I read somewhere that the Fury of Sandman isn't The DCU's Fury.

Then again, I could always be wrong.

I'm shocked at who hasn't been named so far.

Swamp Thing's one.
Zatanna's another.
Phantom Stranger's belongs as well.

I need another. You'll kick yourselves afterwards.

Daniel has appeard (in his fashion) repeatedly in JSA.

and here's an odd guess

Here is a bunch of DCU guys who haved had Vertigo series:

Also Batman had an apperance in Sandman along with the JLA villian who can not sleep. Martian Manhunter has also appeared in a lot of Vertigo books.
I have never read Books of Magic so I am not sure which DCU heroes have appeared in it but I am sure Phantom Stranger is on the list.

Arguments could be made for characters like Drs. Occult and Thirteen and even Prez but really, who'd notice.

Though, enjoyable, The Angel and The Ape of Vertigo never actually reference a previous DCU existence.

Yes, Batman, Martian Manhunter, Rocket Red, Etrigan and even Blue Beetle have made appearances in books like Swamp Thing but they happened before the books were placed within The Vertigo line of books.

What about the Spectre? No one's mentioned him, or did he only show up before the schism?

I don't ever recall The Spectre showing up in any Vertigo books.

You'd think he would but at the same time, I think that's what makes him such a great DC character. Despite the character's Vertigo-ish leanings, it's ability to remain uniquely "DC," in the grander scheme.

Do they have to be alive right now? Because if not, I'll take the Golden Age Sandman.

Also Deadman, who only fails on a hypertechnical alive-now requirement.

[I'm fairly sure that the Spectre showed up in a Vietch-which is to say post-vertigo-Swamp Thing.]

Oh, and the Golden Age Starman and Hourman both showed up in Sandman Mystery Theatre, too.

Hector Hall, Element Girl, Fury were all in Sandman. Batman and Superman both showed up in the wake in Sandman, as well.

Spectre showed up in passing in the very first Books of Magic miniseries, although it was a brief appearance.

The Floronic Man? Oh, right, didn't they decide that anyone with even remotely plant-based powers was taught by Woodrue at some point?

Without looking at the other comments, here's what I got:
*I've seen Gaiman's Black Orchid out and about in the DCU a couple of times.

*Dream's made some appearances outside of the Vertigoverse, most notably Morpheus in Kevin Smith's Green Arrow run, and Daniel in Morrison's JLA and several JSA issues (some appearances more obvious than others).

*Justice Leaguer Zatanna rated her own Vertigo special, and appeared in Swamp Thing.

*Phantom Stranger sure likes to hang around Vertigo, palling about with Swamp Thing, Animal Man, and Tim Hunter.

*Superman and Batman both rated appearances in Swamp Thing and Sandman. Martian Manhunter showed up once or twice in Sandman and appeared in Animal Man. Superman made an Animal Man appearance as well.

*Jason Woodrue, member of the Secret Society of Super-Villains, was in Moore's introductory Swamp Thing story, and showed up in Black Orchid as well.

*Dr. Occult is one of Tim Hunter's pals.

*Jason Blood and Etrigan rated appearances in Swamp Thing and Animal Man, while he was mentioned in Sandman.

*Hector and Lyta Hall have had their histories intertwined with Vertigo ever since Sandman, though they don't often visit.

*Wes Dodds, the original Sandman, was a JSA member who warranted his own Vertigo ongoing.

*And then there's the most frequent crosser-over, Animal Man, who holds both a JLA reserve card and a skeleton key to the Vertigo universe.

That's about all I can think of off the top of my head, though.

Quick comment:
Devon said
"Yes, Batman, Martian Manhunter, Rocket Red, Etrigan and even Blue Beetle have made appearances in books like Swamp Thing but they happened before the books were placed within The Vertigo line of books."
But Batman, Superman, and J'Onn all appeared in Morpheus's Wake, the last arc of the series, when it was a Vertigo book. Similarly, Superman and Lex Luthor showed up in Swamp Thing during Veitch's run. I thought Animal Man was a Vertigo book at some point during Morrison's run, so Blood's appearance in the last big story would almost certainly put him in the Vertigo version of the series.

Muddy waters, these DC Universes. You never saw this sort of crap happening with Helix.