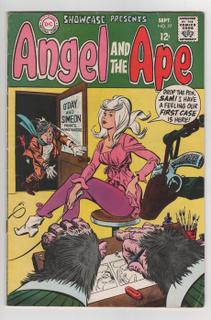 I want...No. I NEED to read a comic about a genius mini-skirt wearin', multi-lingual, fencing computer hacker and her comic book artist partner who's superpower is to "persuade" minds.

Did I mention I that one's sister is Dumb Bunny of "The Inferior Five" and the other's the grandson of one The Flash's greatest villains, Gorilla Grodd?

DC Comics, I beg of you! Give me a new "Angel And The Ape" series to covet. If you can find a home for Bobo, The Detective Chimp, you can do the same for these two. They're wonderful. I'm sure someplace like Starman former hometown of Opal City could use a good pair of crimefighters now that Elongated Man's semi-retired and now that The Black Condor's on his way to dead. You don't have to "Vertigo" them to get my attention. You don't.

Devon, you are my new best friend. I've been jonesing for an Angel and the Ape series since I picked up the Vertigo mini about a month ago.

Hey Devon!
Angel and the Ape is a classic. I'd love to see more lighthearted stuff that fits (if a bit weirdly) into the DCU.
How about the Creeper? Excellent character but not handled too well the last time out or two.
I'd also love to see a Question series that's more in line with Ditko's original premise (black-and-white hard-edged crimefighting) rather than the softer and New Agey take O'Neil pushed in his series-- or the flatout bizarre "urban shaman" version in the recent mini. Heck, if you have to, make him the conspiracy theorist from JLU... but make him *interesting!*
Among other underused characters...
I dunno. We could go on and on.
We know there'll be another Blue Beetle (if DC doesn't let the Charlton rights revert, as we've discussed). Who knows...?
later!
Drew

I think based off Day of Vengeance that there's a Bobo the Detective Chimp + NIghtshade series just WAITING to be made! There's your Angel and the Ape for 2005!

I keep trying to get rid of the Angel and the Ape Vertigo mini-series, and then I thumb through it and realize how much I love it all over again. Fun story by Howard Chaykin, great interiors by Philip Bond, and those Art Adams covers are so very good as well (which make sense, since girls and gorillas seem to be his very favorite things to draw). Too bad there was never a sequel or anything.

I'd love to see a trade collecting the Phil Foglio mini-series from sometime in the 90's. If anybody gets lighthearted & goofy, it's Foglio.

I believe, gentlemen, that it's high time we issue a call for

The Angel & The Ape Archives.