Chuck Austen has been many things: Writer, director, voice actor...vilified.

One thing many forget or just don't know is that Chuck Austen is (was) a very talented artist. While I was going through old issues of "Who's Who In The DC Universe," I took note of one of my favorite entries: Midnight. I remembered loving the entry for its' drawing's sense of whimsy and the exuberence shown in the artist's linework. I proceeded to look in the bottom left hand of the page to see who the artist was and to my surprise, it was none other than... 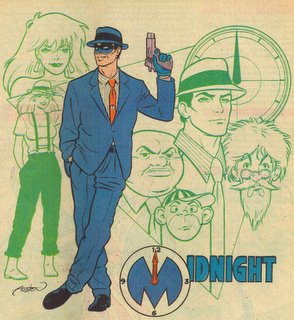 Comments:
He drew a couple of issues of Miracleman under his birth name, Beckham, and later worked on Disney's The Little Mermaid comics.

Wow. That Midnight Who's Who entry created a fondness in me for that character despite never having read a single Midnight story.

I remeber really wanting to know how the monkey fit in, as well.

Also, he participated in the smut glut of the early 90s with a book called Strips that (unlike the vast majority of the books in that glut) was actually readable. The writing was good (and about more than just setting up sex scenes) and the art, while cartoony, showed that Austen has some understanding of anatomy (among other things, breasts looked liked breasts and not beach balls attached to the female characters' shoulders).

I haven't read anything he's done in years, but I would say Strips was his best work.

He's also the only person other than Scott McCloud himself to draw an issue of Zot! McCloud asked him to draw issues 19 and 20 because he was concerned that his wedding would interfere with his ability to get them done on time. Austen did good work, but he was imitating McCloud so it's not necessarily indicative of his work,

So was that actual Midnight comic a Spirit homage thing, or is Austen just drawing him that way?

Don't make his words look no prettier though.

If I recall my comic book history correctly, Midnight was created by Jack Cole (of Plastic Man fame) for Quality Comics. I think Cole did him intentionally as a riff on the Spirit, but weirder.

As for Austen, sure he can draw. I'd like to see him draw more, actually. He doesn't work well in a shared-universe setting, though, and he should play to his strengths. (Much like Ron Marz is unable to write well in a shared universe, but does very well with his own characters in his own worlds).

I hereby demand a Midnight, the Spirit, Crimson Avenger, and Green Hornet four-way team-up by Darwyn Cooke and/or Ty Templeton.

I think I have some old Midnight stuff lying around.

This doesn't have anything to do with the topic at hand:

I just wanted to say that your blog is now officially the first thing that pops up when you Google "seven hells".

Thanks, Rob. Read "CHUD: Thor's Comic Column." Rob writes reviews for it and his writing's help keeping it great.

I dunno, there's still a LOT of penance that has to be paid for the whole "Church of Humanity" storyline. Lord, that was excrementally awful!

Midnight had half an issue of Secret Origins to himself.

From the upcoming Boys of Summer...
http://tinyurl.com/cfxfl

He's been blogging for about 2 months now and has some interesting comments on comics, animation, the world, etc. Since you've had some "interesting" interviews with him, I thought you might be interested.