Say what you will about the man and yes, you will but you have to give credit where credit is due...

when someone asked me, "Who's out there who can write a good Martian Manhunter story?" My first thought was, of course, John Ostrander from his days on the criminally underappreciated 90's series and then my second thought was, "and Chuck Austen."

Chuck Austen? Yes, Chuck Austen. Why? Because Austen captured, with one simple page (and a lot of help from artist, Ron Garney), J'onn J'onzz's loner status to a tee... 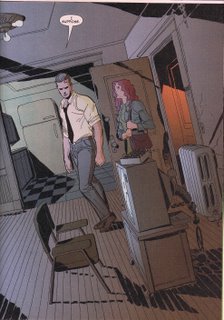 ...and it really got to me. Note his apartment: there are no decorations, no pictures of loved ones. There is no need for a phone because no one calls on him socially. J'onn lives totally alone, except for his memories.

He has no furniture, save the one chair, because he knows no one will visit. The one chair in the apartment is positioned in front of the one thing that seems to take his mind away from it all: the television. The television offers him everything he could need: information and occasionally, companionship. The television tells him where The Martian Manhunter may be needed next. The television helps J'onn keep his mind off of how un-needed he may feel.

Perched atop his television, the one thing that brings him absolute joy: The beloved Oreos. When I think of J'onn, eating his Oreos, I know that he is happy, so I am happy for him.

One little scene saying so much. With that, Austen became kinda alright in my book.

I'd get to Austen after Chris Claremont and before Rob Liefeld.

I'll reserve my judgement on Austen unless or until I see the script from that issue.

If Austen wrote the description of the apartment, then point taken. Otherwise, advantage Garney.

Is there no one who will stand up for this man?

I actually rather liked his U.S. War Machine series for Marvel, if that counts for anything.

Harrumph! A strong defense of Austen ...
IF that wasn't the artists idea.

However, I look forward to further evidence from you on Austen's behalf...

Where's that panel from?

What's with the big flexi-tube thing on the back of the TV.

Wasn't J'onn a TV junkie in New Frontier too? I don't know which was first.

J'onn's love of TV was established in his SECRET ORIGINS story from around 1987 or so by Mark Verheiden and Ken Steacy. The idea was that, from a race of telepaths who couldn't hide anything from anybody, J'onn was totally captivated by a totally visual medium where he had to take everything at face value and had no idea what could happen next. He responded most strongly to cop shows like "Dragnet," and was inspired to become a Jack Webb-like cop.
Gerard Jones and Eduardo Barreto used the idea in their "American Secrets" miniseries too. (And I highly recommend both stories!)
--Chris K

If it weren't for the fact that the rest of that issue (and arc) treated J'onn and the other heroes as rookies who'd never dealt with death (and J'onn as a humorless, inhuman being who hadn't actually been living among humans and friends for fifteen-plus years), then I could get behind a defense of Austen on that point.

On the other hand, "Superman: Metropolis" was excellent. If I were going to defend Austen, I'd start there.

"J'onn was totally captivated by a totally visual medium where he had to take everything at face value and had no idea what could happen next."

You'd think by the same token he would be fascinated by all human communication and entertainment media, and would have a huge collection of books, CDs (or MP3s), DVDs, paintings, statues, tchotchkes, etc. - none of these convey any information telepathically, so would contain the same element of surprise and wonder at what comes next and what the artist really meant.

At some point, he would probably start to think of human art and text as having their own reality apart from their creators' intentions, and have an alternate identity as a post-modern theorist...

..and that's what your blog is for, Tom.

Oh, right. I should post there at some point :).

Vol. 2 should be interesting.

Wow, all comments about writers and such aside, that panel makes me sad. Poor J'onn. He's like the hapless nerd you always feel terrible for in movies. I can just see him sitting there in the middle of the night, sitting hunched forward in his chair, munching on Chocos, the only part of his apartment illuminated being the patch of light from the screen...

I'm with Chris - I wrote about U.S. War Machine a few weeks ago at Comics Should Be Good. Austen is lousy with a lot of his work, but that book was quite good. And he drew it, too.

Thank you, thank you for posting this. I'm going to approach Austen a bit more objectively from now on.