It's Tuesday...no, it's actually Wednesday this week...so you know what time it is! It time for... 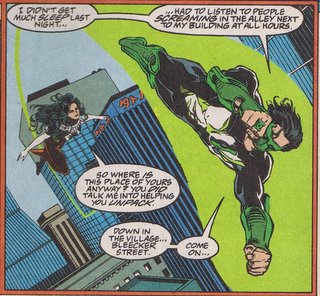 "Had to listen to people screaming in the alley next to my building at all hours."

Why one must loathe/love Kyle Rayner, Adult?

Not once, not once, did it ever occur to him that maybe one person in that alley could have been screaming for help.

Past generations of Rayners have held the following jobs:

Head of security at Arkham Asylum, Nero's fiddle teacher and Army Intelligence Officer stationed just outside of Germany circa 1939... 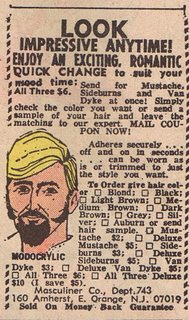 Rorschach would know this.

I have lived in an apartment in the Village.

There are people screaming at all hours. They are never screaming for help.

And even if they were, after listening to them screaming into their cell phones, drunkenly "singing", or shouting "WOO HOO" at THREE IN THE F%$%ING MORNING, you might be less than inclined to help them too.

On the other hand, he's the Goddamn Green Lantern. He couldn't just conjure up a good pair of Bose headphones?

My only real experience of Kyle was in JLA, in which he was quite sweet, but I was always under the impression that while his ring had no weakness whatsoever, his weakness was that he was a bit thick. I'm glad to see this theory was accurate.

(Other theory is that Ganthet picked him to prove some obscure philosophical point re nature of heroism etc, rather than for any practical reason.)

Honestly, it's no wonder the kid left Earth. In space, no one can hear you whine.

Now you know why Hal likes to chill in his ring-generated Cosmic Space Womb.

Also, is it considered "keeping a low profile" when a superhero flies in and out of an apartment in the Village?

And if it's a walk-up, do you think he uses his ring to move the furniture in?

Damned lazy, pretty boy Lanterns... and town had a Boondock Saints reference in there, good on him.

I don't think he was necessarily referencing Boondock Saints (or Watchmen, for that matter), as the Kitty Genovese incident as described in both actually did happen... :x

I agree with Steven. Couldn't he just order his ring to block out the sound? Or take it directly to the source and intimidate everyone to shut up?

I thought Bleecker street was in Newark, not New York. But I could be blurring the two cities together since I went to them both in the course of one day.