Friends, I come to alert you to a serious threat plaguing DC's superheroines. A silent menace, it strikes on a monthly basis, afflicting one in every one of its heroines. It is...
CHAYKIN-ITIS.
No one knows its cause and as yet, there is no cure but the syptoms of Chaykin-itis are easy to recognize.

The need to stand as if you've suddenly discovered you've grown an 18" manhood. 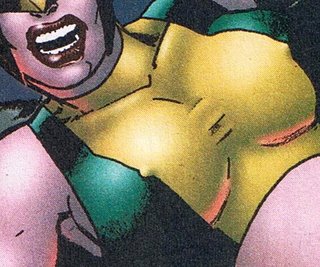 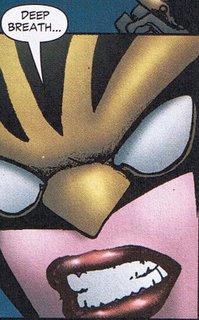 An obsessive need to slather one's self with lip gloss before fighting crime.

Constant gritting of the teeth in order to show determination along with your freshly whitened teeth. 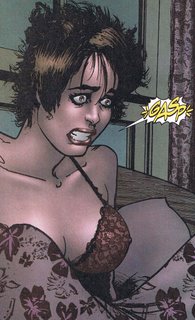 Do not despair. There is light at the end of the tunnel. Your Chaykin-itis (hyper-sexualization) will last only as long as Howard Chaykin... or Frank Miller's stay on your title.

Sadly, I still choose to wallow in your misery.
# posted by Devon Sanders @ 12:41 PM

Comments:
Remember when those wacky jokesters Chaykin and Simonson were suggesting that Hawkgirl's dating circle might expand to include other superheroines? Smart money rides on a Hawkgirl/Batwoman event before the year's over!

Also, it should be done like that issue of Thor, all in splash pages.

Wait, I thought Hawkgirl was straight... why would she be fooling around with Batwoman?

I wouldn't be surprised a lot of superheroines end up fooling around with Batwoman if their books aren't selling enough. A drunk fling would have to be good for at least a 5,000 copy bump.

Assuming she's not into that sort of thing, Manhunter can thank her lucky stars she's already been canceled.

It would have been cool if they had Hawkgirl as kick ass as Hawkman in the latest series. Alas, she has her own title but still comes off as a sidekick.
When and hopefully, Carter comes back, I have a feeling the first thing he's going to say is "Thanks for holding the fort. Can you get my bags from the ship?"

I initially read "Chaykin-itis" as "Chaykin-tits." Same thing, I suppose.

Any thread relating to the "private share time" between Hawkgirl and Batwoman is useless without pics.

Chaykin cares NOTHING for your defense of modesty!

Please, please tell me there are Chaykin-brand garter belts too!