The Bat Cave Is Closed 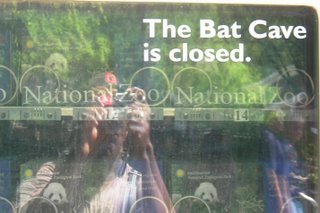 Taken at the National Zoo in Washington, D.C.

Comments:
Not that it's any of my business, but why has Batman stationed the Bat Cave in Washington D.C. as a tourist attraction open to the general public?

Is this some unrevealed plot twist from 52 or did he just feel the need to get revenue from tourists to make up for the failure of "Batman and Robin" at the box office?

Either that, or Frank Miller's "Holy Terror Batman" is actually a documentary in graphic novel form.

Clearly he's trying to trick his numerous enemies into following him out of Gotham, allowing non-psychopaths to become the mjority again, ao hopefully the sun will actually shine sometimes.

Now that i think of it, it already worked. When Sawyer visited Montoya in 52, it looked sunny outside didn't it? Good job Caped Crusader!