Grading On The Curve

Over at The Great Curve, they recently wrapped up their "Top 50 DC Universe Characters" and many wonderful things unfolded before my very eyes.
Animal Man's first name is Bernhard. "Ahh, a flamer! What joy that will bring Bernhard." *snicker*
"Barry" is short for Bartholemew and thus, his grandson, Kid Flash (Bart Allen) was named after him. I'm "slow." *sniff*
Hawkman placed higher than Adam Strange. ("Hawkman couldn't be here today so, we at "Seven Hells!" would like to accept it in his stead." We then proceed to wreck the stage.) 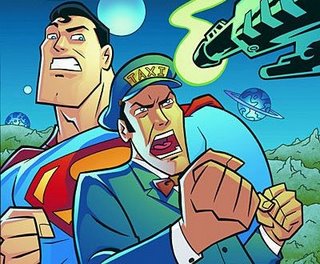 Space Cabbie not only made the list but came in at number 18, placing higher than Tim Drake, The Question, Jonah Hex & Zatanna.
What f*****' comic are you all reading that I'm not?!?

Space Cabbie? Let me say it in the air, so that I know it's true:

Comments:
He rocks the bowtie! Which not even Jimmy Olsen does anymore!

I believe some ballot stuffing occured. Either that or a Diebold machine was used to calculate the votes.

You want to know how it happened?

Hmm, this sounds like a job for. . . The Question!

Seriously, this should be right up his alley shouldn't it?

Sure. How can you not?

What's not to like, although I would have rather seen Kamandi on the top 50!

I think there are two reasons people love Space Cabbie.

First, the basic concept of the character is cool. There's nothing unique about being a cab driver, nor is there anything special about being in space--not in the DCU, anyway--but combine the two, and you have a winner.

Second, since he's barely been used over the past 30 years, no one really has a reason to hate him.

So in short, I don't think it's the character of Space Cabbie himself that appeals to fans, it's his potential.

Space Cabbie is one of those concepts that is so astoundingly, hopelessly lame that most people (myself included) can't help but love it. And I don't think it's an "ironic concept" sort of love, either. It's just so mind-bogglingly stupid that it ends up creating genuine affection in people, kind of like one of those dogs that chases its own tail, bites the tail, yelps out in pain, and then proceeds to chase its own tail again.

Plus: cabbie in outer space. It's just so representative of Silver Age DC sci-fi genre-smushing, and may only be topped by the Atomic Knights and their ridable dalmatians on that particular scale.

There are four Robins, but only one Space Cabby.

Yeah I don't know what to make of it either. I get the concept and how brilliantly simple it is but I've never ever read a Space Cabbie story and probably never will until the Showcase volume eventually gets released.

I do praise the KISS Keep It Simple Stupid approach to most things but I have a feeling this idea erred on the side of stupid as opposed to simple.

Plus cabbies, but definitely not all of them, can be creepy.

It's the word "Space" in front of a mundane word.

For many folks, including myself, this idea of sci-fi shot through with a heaping dose of normality/familiarity is very appealing.

I don't have a problem with people voting for Space Cabbie over other characters if they genuinely like the character.

But I think this is a case of rampant "web witticism," where each voter was just trying to be funny and pick someone who would get a laugh on the list. I would bet good money that a lot of the people who voted for him have never read a story in which he appears, but only know of him through comic blogs and other references.

There obviously should have been a clause in the rules specifying that you had to have READ a character to vote for that character. :)

Hey, I'm just grateful they didn't allow people to comment on their choices. The "web witticism" that would follow would've been too much for me, I'm sure.