We're back as Lady Cop Week continues! After dazzling young Latinas with her VD skills set, Liza Warner, Lady Cop is set to help this young girl face one of the toughest challenges of her young life... 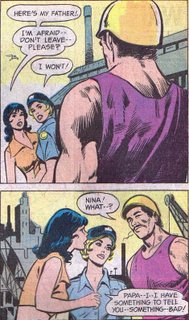 ...telling her Papa that that purple wifebeater is doing absolutely nothing to set of his skin tone. What was he thinking?!! He's an "autumn" for God's sake! 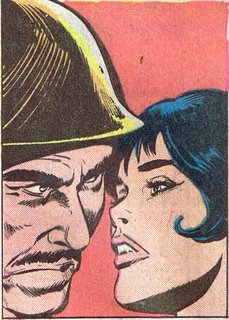 One of my favorite comics of all time was G.I. Joe: A Real American Hero #21 or "The Silent Issue" as it's come to be called. In it, Snake-Eyes, Joe's resident mute, disfigured ninja/commando silently infiltrates a terrorist stronghold through means of stealth. In the whole of the comics 22 pages, not one single word was spoken.
Twenty-plus years later, no longer reading comics with a child's eye, I've learned enough about myself to know that I'd read a monthly comic where Nina would silently whisper into the ear of various DCU inhabitants, telling them of her VD.

Who wouldn't read that comic?

Lady Cop: She'll take a punch for your sins, a veritable pugilistic messiah figure, she is.
Daaaamn, this chick can take a punch to the head from a Latin dockworker like no one's business!
...and that's when it dawned on me. Liza Warner would be the perfect dinner companion for one Harold (Hal) Jordan, test pilot/toy salesman.
An open letter to Geoff Johns:
With Coast City being nearly vacant, there must be some kind of need for a police force. Coast City could use a cop that can take a blow to the skull like nobody's business. Picture it: Hal Jordan could be standing under a dangling piano (No, Geoff, I don't know why this is happening, I'm just the f***in' idea guy here. Make it work and stop askin' me dumb shit.) and out of nowhere a flash of blonde and blue comes a-chargin', knocking Hal out of the way just as the piano comes crashing down.
It's Liza Warner, Lady Cop!!!!

Somehow, they managed to find... each other.

Somehow, they still manage to bang their heads on the curb. 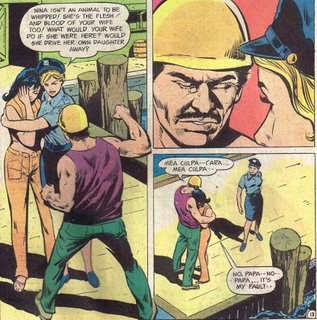 PaPa is so overcome with emotion, it drives him learn Latin off-panel.

Yes, Nina. It is your fault. If only you'd listened to your Papa and stayed on the docks...
The real world is filthy with VD. If only you'd stayed down by the Skeevy's Glen docks where it's safe... 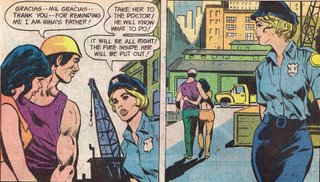 Only penicillin could put out the fire within one of Robert Kanigher's "fiery" Latinas...

Tune in tomorrow as Lady Cop Week ends with Devon's possibly finding "The Killer In Boots!"

Comments:
And she LEANS INTO THE PUNCH.

Lady Cop is a total dude.

That was a great issue of GIJoe, and the couple issues following it where just as good, iirc. Wasn't 25 the big, big climax to the snake eyes / stormshadow storyline?