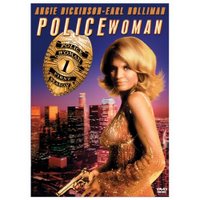 Picture it. The year is 1975 and America is giddy with possibility as Angie Dickinson returns to series television hot on the heels of her cinematic triumph, Big Bad Mama.

The next year will see the debut of Charlie's Angels, the way we view blondes holding guns at t*t level would never be the same again. Sensing a void in the comics field...

Enter comics visionary "Crazy" Robert Kanigher with the now infamous 1st Issue Special #4 featuring Lady Cop, a comic so wonderfully "slow", you just want to build a movie around it, have it ride the bench, score the winning goal and vote it Homecoming King, thick glasses and all...

Self-preservation is a mother as young Liza Warner cowers under the bed, helpless, watching as her roommates are "droppin' one-by-one--like cards!" Victims both of the nefarious and color-blind "Killer In Boots." When the police arrive, as Liza recounts the tale, one particular cop notes that she has "the camera eye of a born officer." That and she's already experienced at undercover work. Get it? She was under the bed, hiding? "Under cover...?"

To hell with it. Anyway, driven to find her roommates' killer, our Liza enrolls in the police academy where knowledge such as this is imparted upon the recruits... 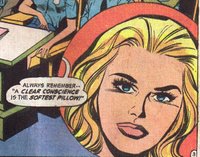 Is it me or does it look like Liza done gone and left the building?


Liza goes on to graduate from the academy and some guy who just stole one of Billy Batson's sweet ass sweaters crashes these future pigs' "happening." 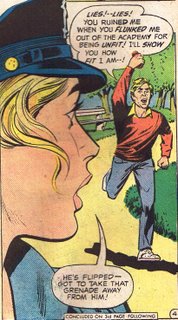 Oddly enough, this is how Scip responded when told he'd never own a comic book store. 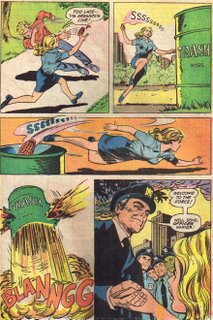 Y'know, the only thing that could have made this page more exquisite was if instead of helping her up, at the end, he shows her love and gives her some "dap."

What does saving the future cops of.... Y'know...? I don't know where the heck this comic's supposed to take place. It gets you roof duty in, for the sake of the story, let's call it... Skeevy's Glen. 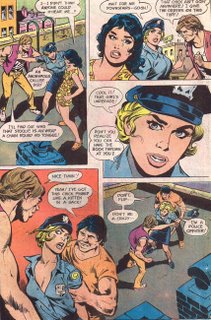 Where did the guy in the orange shirt come from? Did The JLA lose track of one of their transporters? Why does the one guy know how to pin a sack of kittens? What universe do these guys occupy where it seems like a good idea to rape someone... and a cop, at that?!? These guys must have apprenticed under Doctor Light. 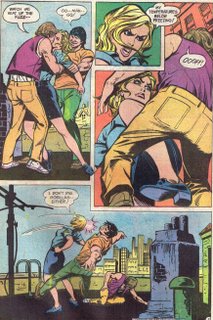 Listen, I know there is absolutely nothing funny about rape. It's one of the worst of crimes someone can perpetrate upon another but in the hands of Kanigher...well, how can you not love a gal who can work in a good "gorilla" joke? 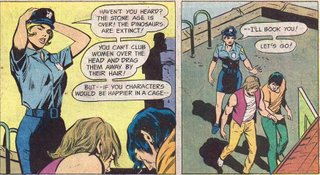 Is she not glorious?!? After whupping two would-be rapists & making a "gorilla" joke, she backs that shit up by putting her hat back on and referencing "cages." Lady Cop, you makes my seat wet. 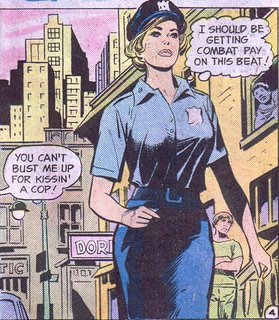 Her head contains so much awesome-nosity the panel can barely contain it!


All that and it's just her first day on the job!

Come back tomorrow as Lady Cop Week continues with a special guest appearance from one of the denizens of The Marvel Universe...

Is Didio asleep at the wheel? Why has this woman not joined the GCPD by now? She needs to take Montoya's old job...

while wearing that outfit.

I have never ever seen or heard of this story!

Thanks for posting this!

And Scipio is right. Gotham Central would still be active if she'd been on the GCPD.

I vote for a team-up between Lady Cop and COBB: OFF THE DOME, co-written by Devon and Beau Smith, penciled by Frank Cho, and inked by Eduardo Barretto.

Money in the friggin' bank. :)

And you can't see the appeal of Space Cabby?

When people say pre-Crisis was terrible I have no friggin' idea what they're talking about.

I totally would've bought Gotham Central if it had been more like this.