Fresh from avoiding a "rooftop party" in Skeevy's Glen, Liza Warner, Lady Cop sees a little Black child without any money for ice cream, promptly rectifying the situation by eating some in front of the little girl, doing a little shimmy, saying, "You don't have no ice creeeam." Just kidding. Just kidding.
What actually happens between panels is even more disturbing... 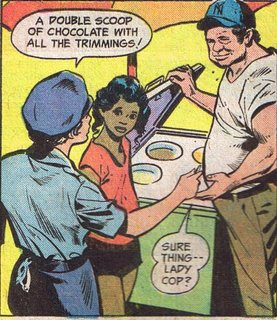 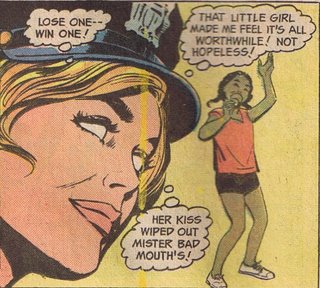 Apparently, that kiss was so good, it made her irises jump out of her head.

Now, we don't actually get to see a kiss on the mouth or anything happen between the panels but maybe it might not be such a good idea to let random kids kiss you and all? Might get somehow misconstrued.
After nearly being savaged on a rooftop, Lady Cop makes the time to buy a Black girl chocolate ice cream. Lady Cop, one of "the good ones."

As we will soon see, no one knows more about "The Clap" and its seven deadly venoms than Lady Cop. 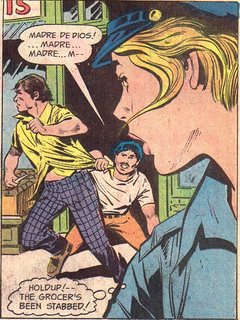 Shit, yo! Bruce Banner's robbing the bodega!
Hey, man... purple pants are becoming more expensive everyday. I'm not gonna cast aspersions on Marvel. A man's gotta do what he's gotta do to keep purple pants across his ass, son. 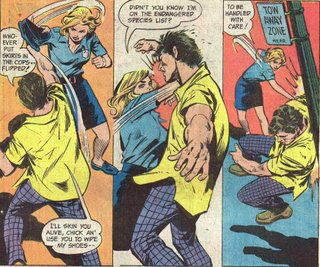 Lady Cop: Whupping men's asses with a hat since July 1975.
Dammit, "Hulk" up, bitch! Make it interesting! What's it gonna look like when you go back to Marvel after some chick whups your ass with her hat? Dude, Son of Satan's gonna have a field day with this! 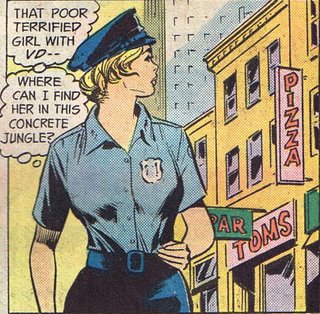 If this were one of the slides on a Viewmaster reel, I'd entitle this one: "Lady Cop on "VD Foot Patrol."

Tune in tomorrow as Lady Cop Week continues with... beards.

Comments:
I think I will randomly begin conversations with coworkers that start "That poor terrified girl with VD..." and then walk away, leaving them hanging on that.

So powerfully does Lady Cop toss Bruce that it bends the very steel of the lamppost he bounces off of.

I want to be first in line for a Lady Cop on "VD Foot Patrol" T-Shirt.

Yeah, but if they brought back Lady Cop today they’d rewrite her backstory to say she was sexually assaulted. In high school. By her best friend’s mother.

And I hate to quibble with her awesome physical prowess, but how does a woman who can beat two rapists up on a rooftop, or throw a guy into a signpost, fail to catch a girl in a skirt wearing sandals? Lady Cop wouldn’t last long on the GCPD.

in the DCU, "VD" stands for "Velocity Disability," which is usually contracted from mixing lightning and common crime-lab chemicals.

Everyone assumes she belongs in Gotham City.

I'd put her in Coast City. At some point we'd get to see her flip Hal Jordan over her head!

We need Lady Cop back, but now she's the new head of the Metropolis SCU. Or better yet, she's Nightwing's connection to the police department. They trade case info and flirtatious remarks.

I am unable to even think the phrase "shit yo, Bruce Banner's robbing the Bodega!" without dissolving into giggles.