One Of The Greatest Stories Never Told 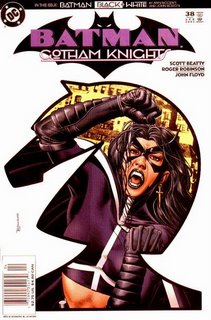 Who remembers this little gem from 2003? Following the Batman: Bruce Wayne, Murderer storyline, Batman goes on a quest to find out the whereabouts of his former bodyguard and love interset, Sasha Bordeaux (currently of Checkmate fame), bringing Huntress along for the ride. This one had it all: globe-spanning espionage, Mad Hatter & Scarecrow in the employ of Checkmate, the motherfarkin' Question running interference for her and a shocking ending I truly did not see coming:
Huntress leaving The Bat-Family to become Checkmate's new Black Queen.
Soon after, The Huntress resurfaced as a member of The Birds Of Prey and the story of Huntress' time as Checkmate's Black Queen has never been told.

You don't just become Checkmate's Black Queen and just frickin' walk away!!!
That s***'s like The Mafia! With Checkmate standing at the forefront of all things DCU, will we ever find out just what the hell happened? I mean, it's Huntress. It's Checkmate! Two great taste that taste great together!

Comments:
Scott Beatty was one of the better writers of Bat-books of the early-2000's. Every page you could read his love and knowledge of the characters. Where the hell is he now, one year later?!

As far as I know, he's been doing alot of work for DK Publishing's Ultimate Guides.

All very good reads and yeah...

I definitely wouldn't mind seeing him do some comic book work again.

I guess you have to be reading the book for a while, but Huntress as Black Queen doesn't really appeal to me, at least not in Checkmate's current incarnation. Of course, my only exposure to the character has been limited to the Gail Simone Birds of Prey trades.

Well, really, if Emma Frost can be the White Queen and then become an X-Man, shouldn't Huntress be able to do something like this as well?

Recently, I read somewhere that this story would be followed up on. Then again, this is coming from the same people who told us to watch Nightwing during Infinite Crisis. Still watching...