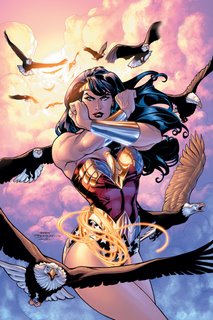 Just in you were (or weren't) wondering what my thoughts on last week's Wonder Woman #1 are, check out CHUD: Thor's Comic Column to find out.

Here's the first paragraph to get you started:

The public has seen you slice The Man of Steel’s throat on live television. They’ve seen you kill a man in order to save the lives of others. Your gods have abandoned you. Those you once counted upon as you would brothers & sisters have come to view you with a scrutinizing gaze. The world someone else has made for you is questioning your very right to exist within its’ sphere. Where do you go when everything you’ve ever known’s been called into question and taken away from you?

Remove yourself from the situation.

That is exactly what DC Comics is doing with Wonder Woman #1, on sale now, one of the finest re-introductions of superhero iconography I’ve ever read.

Read the rest and find other fine reviews over at CHUD: Thor's Comic Column.