Sorry for the lateness. I lost track of the comic before scanning it all in. Yep, I'm a genius.

Anyway, when we last left our hero Kyle he was inside an Irish bar with Tommy "Hitman" Monaghan...

She left one thing out, though. 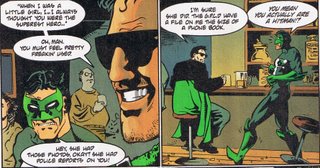 Tommy really is a hitman?!? I don't know what's more shocking: Tommy's nonchalance about The FBI's file on him or Kyle's finally realizing Tommy's a hitman after having a gun shoved down his throat. 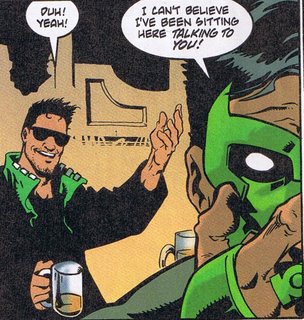 Aww, man! I guess that means they won't be teaming up. Oh, the slash fic that could've come from that! 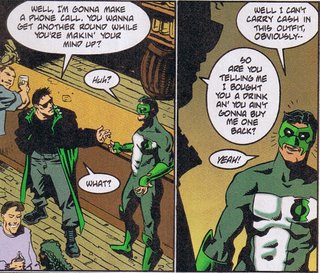 From what I've heard, many of Kyle's girlfriends also called him "The Green Tightwad" but for... *heh*heh*... many... many... different reasons.
And so ends Kyle Rayner: ADULT! Week!

Comments:
"Green Tightwad"! Oh that is just
precious! Bhwahahaha! Seriously,
this was one of my favorite issues,
so thank you. Who knew that superhero outfits didn't come with pockets?

Superman's has a pocket in his cape.

Batman's belt has tons of pockets. (One DEFINTELY includes the Wayne money clip).

Flash can always run home in such an emergency.

Aquaman would only order water anyway.

And as for Wonder Woman and Hawkgirl... really, when was the last time you saw a hot woman EVER buy her own drink in a bar?

Kyle could totally fit all kinds of bills and plastic in those big honkin' kneepads of his.

Also, shouldn't that have been "GCPD", not "GPCD"?

Wait, I don't get it. Why would his girlfriends refer to him as the Green Tightwad?

Question: Isn't Kyle's costume a construct made by the ring? I thought that was how he could switch costumes every so often.

At any rate, you really wouldn't think it would be that hard to add some pockets.

Or heck, use the ring to make the equivalent of those web puches Spidey carries on his back. He keeps his wallet in there, Kyle could try that.

Ah well, that's all secondary to the main point: It's fun watching Hitman and his buddies humiliate Kyle Rayner.

Wait a sec -- the ring constructs are green, money is green... He should have just handed the bartender a roll of imaginary dough! Drinks for everybody! Which reminds me of my favorite bit from the "Bob & Margaret" cartoon.

Cashier: This twenty's got a picture of the Spice Girls on it.
Shady grocery shopper: 'At's right, luv. Special edition. Came out last week.
Cashier: ...I knew that.

Hey, it could have been worse for
Kyle. They just made fun of him.
Tommy threw up on Batman's shoes!
Haw!

Yeah, but this was Batman's response.

Kyle responds to ridicule by helping a known killer beat the FBI.

Now, you get to read it in "trade paperback."