The Nineties were a cruel mistresss to DC Comics. Seemingly fresh out of ideas after the early 90's success of "The Death of Superman," DC went on a creative hiatus and decided that in order to stay in the game, they had to change with the times. Gone was the reverence afforded a gorilla in a wedding dress, enter a somewhat Marvel/Image-esque "grim 'n gritty" approach in producing their comics. DC Comics went "dark."

Gone from the comics racks were books such as DC Comics Presents and The Brave and The Bold, where DC's heroes would team-up just to fight the good fight.

Comics such as Gunfire, Lobo, Deathstroke The Terminator, The Butcher & Exteme Justice were rapidly becoming the norm rather than exception. Among them was a character borrowing very much from this ethos but at the same time, shunning & skewering it. One of 90's DC's few bright spots, the Garth Ennis (Preacher) scripted title, Hitman.

Elsewhere, long-standing heroes such as Batman, Superman & Hal Jordan were being broken and killed and replaced by younger, fresher characters. Among this new breed of character was one Kyle Rayner, the last & littlest Green Lantern.

So for those who ever wondered what would happen when 90's most juvenile superhero meets absurdist, 90's "grim 'n gritty?"
The pure magic that is Hitman #11. 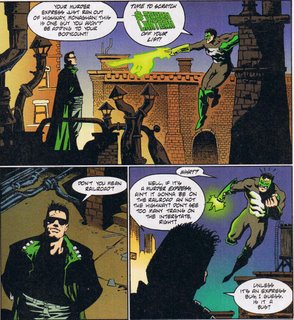 How wonderful is it that a killer who barely made it out of high school is teaching college grad, Kyle, the power of rhetoric. Tommy Monaghan: hitman, Greek scholar, master of trivium. 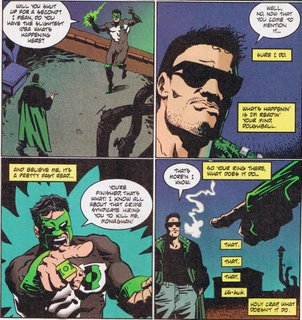 For those not in the know, Hitman has a low-level forms of telepathy. Tommy knows that at any given moment all Kyle ever wants in life is a chance to prove himself and a fried bratwurst with curly fries. 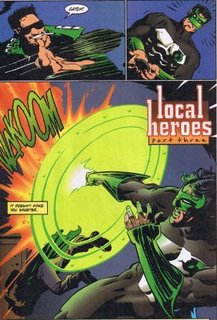 Well, at least now we know that Kyle doesn't catch like a girl. Because most girls wouldn't try and CATCH A GRENADE THROWN BY A HITMAN!!! 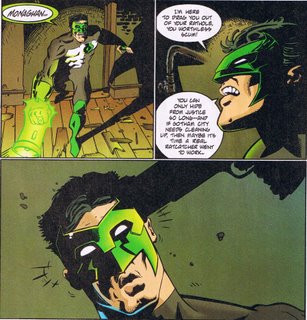 How could you not love Kyle's dialogue? Cliches, idle threats and all. Kyle Rayner equals shorthand for "90's superhero."

Well, it looks like Kyle gets shot in the head and none of his girlfriends (Jade, Donna Troy, that green alien chick with the penis Kyle never got to discover) ever meet him so no woman need fear death at the the touch of Kyle ever again. Tommy Monaghan: patron saint of Donna Troy.

It looks like Kyle Rayner: ADULT! Week's already over.

I'd like to thank Brooklyn, my baby's momma... What? Oh, it's not over? Kyle lives to see another day?
Well, then... tune in tomorrow as Kyle "fists" Tommy.

Comments:
Oh I loved Hitman, I think I have the entire run. Did you see the one where Batman punches Tommy in the stomach, and he barfs Tai food
all over Batman's boots? Haw!!
The run-in with Kyle is almost as
good. Looking forward to the bar scene! Teehee

Doesn't Hitman find some way to humiliate just about every member of the Justice League throughout that run? Maybe not Wonder Woman...

The Superman issue of Hitman (titled "Superfriends") is honest-to-god one of the best single-issue stories in DC history.

And you can take that to the bank, son.

I thought Kyle wasn't actually a college grad. I vaguely remember him being an art school drop out or something like that...

brandon, Hitman takes a peak at Wonder Woman in JLA #5 if that counts for anything. Hehe, the only reason he went to the JLA try-outs was to use his x-ray vision on her.

The Superman issue won the Eisner, didn't it?

Kalinara's right, he was an art school dropout.