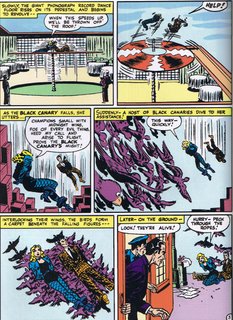 THE GREATEST BLACK CANARY PAGE IN COMICS!
# posted by Devon Sanders @ 11:33 AM

Comments:
Wow. I never knew the GA Black Canary had the ability to command birds like that.

she even had a GL-esque oath happening. When I become a supervillian, all enimies will be desposed of via giant turntable.

Nick no one will know what the giant turntable is, go with a huge CD door the crushes them or something.

"Nya-Ha-Ha! You will DIE in my ingenious iPod of Death!"

More than likely, the iPod will be filled with illegally downloaded trax and the villainous Pirate will get 20 years to life.

And here i thought giant props were only in Batman. That *is* awesome.

What the fu-? Where did THAT power come from?

Do actual black canaries even exist?

They must have been thrown pretty high for her to recite all that poetry in time.

Ummm....how did the black canaries hold up the people AND keep flapping their wings to fly?

I especially like the way the lad-in-distress lapses into deadpan silence after uttering his cry for help. Clearly, he is as bemused at BC's bird-summoning power as we are.

Oh, is that Larry Lance? Guess he's just blase about it by now - he did get tied up and rescued by BC quite a bit.

Hurry- peck through the ropes!

Those are some big canaries....

I guess I can stop working on my 8-track of death.

This page really has everything! Perhaps my favorite part is how, without comic book physics and dialogue techniques, she'd almost certainly go splat before she could get out half of that oath!

Yeah, I gotta go with Michael on this one...

Golden Age Black Canary briefly had the power to command canaries, complete with her cool oath.

Didn't last long and was never mentioned again, although there was an issue in the Bronze Age JLA where she was quite upset at having to beat up some black birds.

(This is when Dinah was the original article, shuttled over from Earth-2, instead of Dinah Jr.)

I think this was the only story where any HINT of that power came up. The Comic Treadmill did a pretty thorough review of the Black Canary Archives a few months back.