What's Right With This Picture? 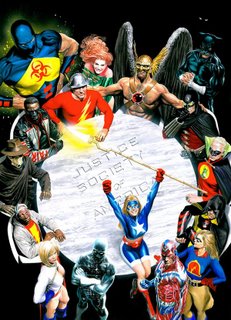 Yes, out of the 17 members of the Justice Society of America pictured, only four are women. And yes, I also see that out of the 17, none of the women happen to have a seat at the table.

Here's a different perspective on this picture...

You see the women, all four of them. You pretty much always have.

Allow me to clarify a bit:

These four women, like the two Black men, the gay man and a Jew who also happen to be there, are there because of what they're going to bring to the table, whether they have a seat at it or not.

I've often said that if you want to imagine being a Black man, you have to imagine being underestimated every time you walk through a new door. I imagine this is a bit like what it is to be a woman.

That said, I find it more incredible that I never once viewed the cover in those terms. It just never occured to me. All I saw was the Justice Society of America. Keep in mind, it was a society where a mere forty years ago, it didn't have a place at its table for Mr. Terrific.

In this new Justice Society of America, actions and abilities are valued above anything else.

This cover has four women on it. Four women who're just as valuable to this team as any four of the men.

When viewed on those terms, there seems to be a lot more right than wrong with this picture.

Comments:
A nicely insightful commentary, Devon, for which I have a sadly lowbrow question, in response:

Who is owner of the set of eyes in the back right, otherwise obscured by darkness? Obsidian? Batman??

The "sitting around the table motif" has been done so many times from its original use in the Golden Age that is has become a JSA-standard presentation.

Sand, Flash, Hawkman, Green Lantern, and Hourman are sitting where they did (or ther equivalents) did on the cover of All-Star Comics #3.

Wildcat came later in the Golden Age so is not sitting but in my opionion, and following my logic, should be in lieu of Mr. T. or Jakeem.

Then again, it is a comic book cover so I shouldn't be analyzing anything this much on it.

I've posted this elsewhere, but it seems to me that Terrific is there because of his ties to the Spectre (who occupied that space on the cover of All-Star #3) and Jakeem, who is in the Atom's seat, follows Al as the smallest member of the team.

But you just can see what Green Lantern (he is Green Lantern these days again, isn't he? Not Sentinel or Emerald Fire or Don't Hit Me With a Wooden Stick Guy?) is thinking, can't you?

"Courtney, get your ass off the table."

I'm with you - while women in comics are often window-dressing, they really weren't in the JSA...

One thing...we don't know who's under that Starman mask. He could be Asian! Yet another minority underepresented in the JSA!

It's kind of a merger between the "Classic JSA Round Table" presentation and the "Wanna Make Something Of It?" cover that's been referenced at least as often since its first appearance in the '80s Giffen/MacGuire Justice League.

You're right! Look at the three front people -- Power Girl, Starman, and Steel - varying stages of the Guy Gardner expression and stance.

As for Starman, I suspect if he's not white he's a black man. I'm very certain this is Thom Khallor, and they have the option of using the time-lost version from the post-Zero Hour Legion who is white, or the grown-up version from the last reboot, who is black.

Either way, here's hoping he actually gets some lines in this series. I dropped Legion because it was taking too long to find out Starboy's story, he's really the only Legionnaire I like.

Is that Damage or Atom Smasher? Damage was like five foot three, put maybe Black Adam beat two more feet out of him.

It's Damage, so Geoff Johns says; however, Al will also be around.

An even lower, lowbrow response:

I'm pretty sure Power Girl is standing where she is for two reasons, and two reasons only.

The bio-hazard symbol on Damage still bugs the crap out of me, though.

they're standing up in case any of the men at the table happen to need a sandwich or a foot rub.

You forgot to mention the Arab

I have examined the cover very carefully, and Alan Scott, Ted Friggin Wildcat Grant and Dr. Midnite are all looking at Stargirl's ass.

Keeping in mind the motley crew of dudes sitting around that table (i.e. hoodlum who summons ghost, lurking pair of eyes, man with wings) I can't think of three dudes whose predatorial gaze would be more traumatizing. Wildcat's probably already been with Courtney because, let's be honest, there aren't women in the DCU who can resist Wildcat. Scott's the kind of dude who would play the 'don't worry, baby, you won't get pregnant' act. And then Midnite is just creepy in general.

So I say to you, mighty Golden Age JSAers: Eyes front. She's underage.

Oh, and I also agree whole-heartedly with Devon's posting. The JSA should embody the ideals of the heroes of DC and having such a diverse and awesome crew makes me excited to read it.