Months after it happened, fans of "real" music are still searching for answers.

"It was horrible! Horrible! All I could do was listen! They made me listen!"-a CD reviewer who wishes to remain anonymous.

I'm Roy Raymond, Television Reporter and next on "You Are Wrong!," we will present to you, an expose' that will blow the roof off of the music biz.

For years, the record and CD sales have seen a steady decline.

What's behind all this?

Most think it's due to the dilution of "realness" ushered in by today's CD & radio executives' creating music that values aesthetic over actual content.

"You Are Wrong" has obtained exclusive footage from a source known only to us as "J. Blood." "J. Blood" is not a rapper or an entertainer but mainly, as he puts it, "a very concerned citizen of this planet Earth."

Fair warning: the footage we are about to show you contains disturbing and often graphic language so those with small children may want them to leave the room.

(Footage appears static-y)
Reporter (standing in front of a gigantic hole in the ground) : I can't believe they sent us to film a damned hole.

Cameraman: Well, it is a fine damn hole.

(Hole spits up fire and brimstone)
Reporter: What was that?!?

(Suddenly, two demons climb from the hole, dancing and singing and waving their hands in the air like they just don't care.) 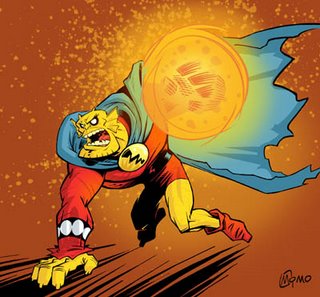 Reporter: Jim! Are you getting this?

Etrigan The Demon (Emerging from the hole, rubbing hands together in glee) : Today will be a good day.

(Punches the cameraman, the camera drops to the ground.)
(Hours pass and the hole is now surrounded by A&R executives)
A&R exec: You promise this guy will go platinum?

Etrigan: I assure you, this demon is of Hell's lower caste, with a knowledge of rhymes, vast. Know this, I am no liar. Who knows better than a demon how to spit hot, hot fire?

A&R exec: This demon got a name?

Comments:
Rhyming 'caste' with 'vast' is the glorious, Federline-esque touch that makes the gag.

Truly the master has returned.

Can we can send Constantine after him?

Welcome back. We've missed you (your vast legion of at least four female fans)