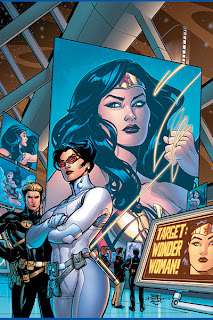 I found myself in a bookstore the other day because... well... occasionally, I do read some things other than comics. Like Maxim, Black Tail, Out, Bowhunter Monthly, Tuesdays With Morrie.

After a while I found myself in the fiction section and there it was big as day, a huge display touting author Jodi Picoult's works. Here's the bubble I operate in, I immediately thought, "Hey, that's the woman who'll be writing Wonder Woman... someday. I wonder if DC will send us any promotional stuff?"

That's when it occured to me, of course DC will send us promotional stuff. They always do. We'll put it in our great big window like we did with the smallish poster announcing Brad Meltzer as Justice League writer and the civilian population (non-comic book readers) will pass it by simply because it hangs in a comic book store window.

Do I sound frustrated? I am because, once again, I'm expected to sell product from an acclaimed author. If history is any indicator, all the people who make the decisions will probably give us is house ads in the comics they publish and 11" x 32" posters.

I do not envy the writer who can move hundreds of thousands of books who comes to the comic business. Your work is definitely cut out for you here.

When noted author Tad Williams came to DC Comics to do "The Next," it was done with practically no promotion on DC's part. DC left us, the retailers to sell this book largely through word of mouth to the customers we already have. 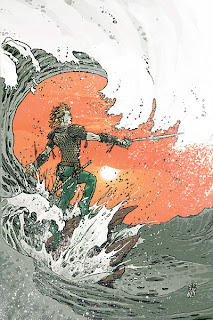 How many of his fans from outside of comics will hear it from DC Comics that he's writing Aquaman for them?

As someone who worked in both book and comics retailing, I am constantly perplexed in the methodology in which both sell books. In the book business, a publisher will give a writer with buzz will have his or her books plastered all over publications such as People trumpeting the arrival of their latest work.

Not so much here in the comic book biz, you may receive a house ad, if you get anything.

Seriously, if I had a dollar for every time I showed someone a Peter David comic and had them say, "He writes comic books? I love his Star Trek stuff."

Is it too much to ask for an "experiment" like placing an ad in Entertainment Weekly or People letting "civilians" know that a best-selling authors like Picoult & Williams are being paired with iconic characters like Wonder Woman & Aquaman?

I'll be the first to tell you I don't know much about DC's specific marketing & advertising budgets but what I'd like to see is less reliance on my having to generate word of mouth in order to sell a comic featuring a best-selling author.

Comments:
With well known authors having their own websites, would that not be the medium that sells their comic work to fans of theirs that may not be comic book readers?

True, but do actors have to build their own websites in order to hype a studio's product?

The truth is that I don't think that Marvel and DC get big name writers for their comics to create crossover with civilians. I think they do it to get a larger share of the fanboy/collector market. And we buy it.

Meltzer's run on Justice League has been slammed all over the internets (sic) but the fact remains that all the collectors bought the first few issues.

If you look at the top 100 selling comics of 2006, you see a few things over and over: Civil War, Infinite Crisis, 52, Justice League of America, Astonishing X-Men. These are either huge company events/crossovers or written by noteable writers. Not one of the top selling books of '06 was written by Gail Simone, by far the most acclaimed superhero writer of last year.

What do I think that means? I think it means that the big companies use the big names to fool us into reading mediocre books (except Astonishing X-Men, which rules). They don't need to fool civilians into buying the hype. That's what movies are for. If they really wanted to woo civilians into buying single issue comics, they'd probably make better comics.

Bully asks similar questions from the side of a little stuffed animal in book retail.

Honestly, it seems like Marvel and DC get big names outside the industry to dazzle readers who already exist - rather than bring new people in.

It's just two big fish splashing in a very small pond, and it's very sad.

As a long time Fan of Tad williams, and a comic book reader, I have beem trying to keep awareness of Tads comic works on The shadowmarch board, However one of the hardest things is that many mainstream book fans simply are not interested in comics, period.

Ok, now I feel like a moron because I didn't know Peter David had done stuff for Star Trek.

It's almost like they don't want more people reading comics. I know little of marketing but I could probably come up with a dozen good ideas for how to sell more comics that DC and Marvel just aren't doing.

"However one of the hardest things is that many mainstream book fans simply are not interested in comics, period."

And how many comics readers are mainstream book fans, for that matter?

I don't tend to follow the "Da Vinci Code Knockoff" genre very closely, for instance, so I was more like "Huh, so this Meltzer guy writes novels, too?"

I was always under the impression that it was the big novel-writing authors' name that SOLD the comics and not the other way around.

I think there is still stigma attached to comics that is almost subconscious or maybe it is what the marketing strategy people believe??-the mentality being "Look we can get a REAL writer to do our comics and not just the comic book hacks that pump out our daily grind"..this is not intended to offend anyone..merely to illustrate a point.

But boil it down: would it be beneficial/good for the Warner Bros. media machine to advertise that someone like Brad Metzler writes comics? I think so..but there are still many literary circles who perceive comics as the realm of children, hacks, and subliterate disenfranchised youth.

First, is Tad keeping Aquaman the way Busiek has him, or is he going back to the superhero version?

Second, I think it's more of a consistant lack of promotion by comic companies to attract new readers. Instead of waiting for some big name to sign to a book, they should buy ad space in magazines and billboards once in awhile, preferably with blurbs from Entertainment Weekly or some other non-comic intensive publication.

Thought you might be interested to know that the author's bio on the dust jacket of Jodi Picoult's new novel (which goes on sale next Tuesday) mentions that she has recently written several issue of Wonder Woman for DC Comics. Not exactly an ad in Entertainment Weekly, but it's something.