Whatever Happened To Crazy? 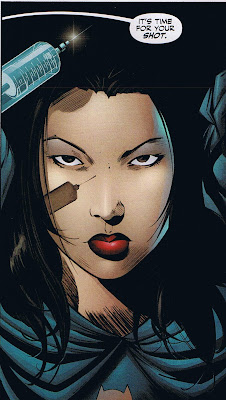 Deathstroke: Trickin' out and helping to explain away the motivations of crazy-ass teenaged girls since 1980.

Comments:
A commenter over at the ISB had the best summation - Slade's hypos will now be the catch-all for every unpopular depiction of comic-book characters.

It's a great way to explain Civil War!

Perspective, people. It's better than a Superboy punch, and redeems one of DC's better, yet less-used, female characters.

She was just in Robin like six months ago. Villains aren't just trotted out every month, like sidekicks and supoorting characters, especially one with real potential like Cassandra Cain.

And her book ended during Infinite Crisis and was immediately brought back in Robin before IC ended. Big Barda hasn't been used that consistently since the mid-90's.

We have Batwoman, now. And more, than likely, Flamebird will take her spot as the new Batgirl somewhere down the line. Let Cassandra be a bad-ass assassin without the use of Deathstroke-brand steroids.

Well, we still don't know the extent of what Slade's drugs have done to her. She may have been doing the crazy villain thing in Robin on her own, and Deathstroke caught up to her after that. Or maybe not.

Still, if it's a choice between "Crazy villain that might be in love with Robin" from Robin, and "Batgirl, captured and put under Slade's control", I'll take the latter.

You do know that the 'death blow' she inflicted on her mother was to impale her precariously on a hook -above a lazarus pit-, right?

isn't Slade pimpin the Velocity drug to that green-clad villain kid over in Flash?

Impalement is alright as long as there is a chance the person will be resurrected crazy? Especially if the impaled person wants to die and leaving them in that position (hang up and paralyzed) is tantamount to torture? This redeems undrugged Batgirl's actions?

Impaling someone over a Lazarus Pit is a bit like shooting someone and leaving them in front of a hospital.

Foolish thought: whoah! Deathstroke between a drug shot and another took even the time to pimp Cassandra's lips and make her put mascara and lipstick underthe hood... pimpin' for pimpin'.

Semiserious one: Mmmm... easier than Wanda's tantrums and faster than Superboy punch, the "crazy formula" will became the most used explaination ever.
Evil or not evil sometime ago Cassie decided to be her own girl. But when DiDio and the others said "we've got to put her back on her basic" I thought at a realaunch, a new way to express her newfound vocation... and they put a former mute rat-lab of an half crazy Cain back on track as a crazy lab-rat hooked to same villany serum.
Her, and Inertia hooked to Velocity 9. Gee, there's some drug Deathstroke hasn't?

Foolish thought: whoah! Deathstroke between a drug shot and another took even the time to pimp Cassandra's lips and make her put mascara and lipstick underthe hood... pimpin' for pimpin'.

Seriously, how big did those things get suddenly?

If only Deathstroke was the guy we could blame for ALL of the inappropriate sexualisation of teenage girls in comic books; as opposed to, say, the writers, artists or editors; who are supposed to be LESS crazy than Deathstroke.

They're falling one by one into the limbo of oversexualization, plumpy pouty lips, striking boobies and grudknowsit what more... go read the Chaykin related entries in this very same blog for reference...