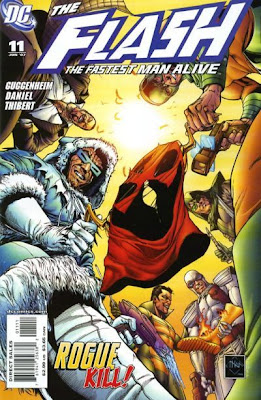 3. Where's my Stargirl DC Direct action figure, braces and all?

6. Why did Batgirl give Deathstroke an audience in 52: World War Three with the knowledge of what he did to his own daughter, Ravager in the pages of her own title?

8. Can we declare Kevin Conroy, the voice of Batman in Batman: The Animated Series & Justice League Unlimited, a national treasure?

9. Did you know she was the voice of Mercy Graves in Superman: The Animated Series?

10. How excited am I that Holly of Catwoman fame will have a major role in Countdown?

11. When "fill-in issues" on the flagship titles become the norm and regular creative teams become the exception, can't someone address this before it before it becomes the norm?

16. Adrian Alphona (of Runaways fame) should do some work for DC Comics someday.

17. *ahem* When's Chief Warner coming back to the page of The All New Atom?

A fine question, but my question is "Man, does Courtney have an incompetent orthodontist, really bad teeth, or what?"

We've gone through "One Year Later", and Courtney's had braces ever since her first appearance. Even given the vagaries of comic book time, you'd think that'd mean she's had them for at least, what, 3 years? Isn't it about time for them to come off, and to draw Stargirl with a retainer, at least?

2) Screw putting John in GLC, he needs to be THE Green Lantern. He never should have not been. Hal is as boring as a 0-0 soccer match and Kyle is an overdose of milk and cookies. Kill Jordan. Make John GL now.

3) As long as she ain't ugly like the majority of the DC Direct females... although those new Wonder Woman figures based off Dodson's work... homina

4) The same as if it were Legends of the Dark Knight or Legends of Superman = a place for all those stockpiles stories to go.

5) Sub Diego returned to status quo = the dumb. But then issue 50 of Aquaman = also the dumb

6) Batgirl is Batsh*t insane, that's why. Always has been

8) Your nation or mine? I'm sure Canada could make it happen

10) Not sure I want to know HOW excited exactly

12) Never read it, but my girlfriend loved it

14) I think that was Johns' fault, as so much of DC's current laclustrehood can be attributed to him

17) and who might that be exactly, he said knowingly

18) Haven't read it yet, but Guy Gardner and Blue Beetle...? Do they step into a boxing ring? Meanwhile, would not the dude who plays Sawyer on "Lost" make a great Guy Gardner? And wouldn't John C. McGinley make the perfect Green Arrow for whatever the hell Supermax is...?

19) When you're that ungodly smart, humility pays dividends... especially with the ladies

20) Nope. But if he does my girlfriend's gonna quit comics, I'll tell you that.

2. I keep hoping. He'd be a good alternating main chartacter, giving us a bit of a break from Guy and Kilowog every few issues. Also, I'd love to see him meet Soranik Natu.

8. Yes, as well as granting him the title of One, True, Official Voice Of Batman For All Time.

11. You'd think, but it seems like editors don't ever want to wield any of that vaunted editorial power anymore and actually force the work to get done.

14. Somewhere during the Johns run, I think.

17. Soon, I hope! And I'd also like to see more superhero scientists employed at Ivy University. What's the female Dr. Light up to these days?

19. Humble, but also secure enough that you actually don't mind admitting there are two folks ahead of you (seeing as there's, what, 6 billion behind you?).

20. Well, he was never in the JLI, so he has a shot. But DiDio's got that mad on for killing Flashes in events...

3. I heard they're still trying to pry her off the Doctor Polaris figure.

4. Something about telling past stories that haven't been told before, even though they've already been told... bleah, I give up.

13. Yeah... Brad Meltzer might as well stick Katana, Halo, Metamorpho and Looker's corpse in there while he's at it. And the clone of Adolf Hitler.

14. When the new Flash pointed at his flute and yelled "size matters!"

15. The smell of burning rubber is no laughing matter.

I did know that about Lisa Edelstein, but only because I watched the JLU credits obsessively to see which big stars they'd gotten from week to week.

Well, if you hadn't dropped Aquaman (if I remember rightly :p), you'd know Sub Diego is still there, only half of it was raised. Or something.
Yeah, that was a bloody stupid idea, Sub Diego was the whole reason I started reading Aquaman, to see DC drop the ball on something that could've been awesome (and was for a time), is disappointing.

I am blown away there has not been a Stargirl figure yet. Maybe for JSA series two...

I was just happy to see him save the day in Justice.

I do. I miss it terribly, along with Impulse.

After the Top undid his "mindspinnning" of the Rogues.


17. *ahem* When's Chief Warner coming back to the page of The All New Atom?

It does ... when you're actually the Smartest Man in the World.

No. Barry Allen will come back and Bart will return to being his youthful counterpart, Impulse.

I had my braces for five years. I had to have theeth pulled, and they didn't grow in as fast as the though. It makes sense.