When one thinks of missed opportunities, one (namely, me) may think of that one time Halle Berry stopped by Devon-Cave with her supermodel/cheerleader entourage to help them test out their new "neck massagers." I was, fortunately or unfortunately, out adopting babies from Sweden to bring back to America in order to replenish America's underburdened trailer parks.

I won't reflect on the loss of actress/supermodel/cheerleader fun I missed out on. Instead, I choose to be secure in the knowledge that I was doing good works.

At least to me.

Anyway, back to comics... I've been called "ornery." Like Yosemite Sam. It was a compliment.

In 1996, I learned the true meaning of the word. In the pages of Nightwing #1, I was introduced to Dudley Soames and created by Chuck Dixon was the most crooked cop in the whole of Bludhaven. The only thing more depraved than being the most crooked cop in The 'Haven would be The Red Skull's taking on Archie Andrews as a sidekick, naming him "The Li'l Panzer" and dropping him off at Black Adam's front gate.

Anyways, while serving in the Bludhaven PD, Soames receives the notice of Bludhaven's crime boss, joining his criminal organization while also becoming an informant for Nightwing.

That wasn't enough to stop Soames. Evil like this doesn't just roll over and die. 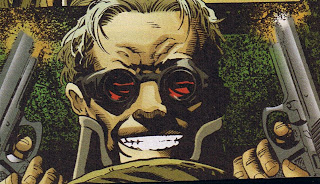 Soames miraculously survived having his head turned around backwards and re-trained himself to see "forward" through the use of special glasses and mirrors. Re-naming himself Torque, Soames went about the business of regaining the city he once held in terror.

Now, how dedicated to being an asshole do you have to be to re-learn everything just so you can start more sh*t?

If he wasn't so damned evil, he'd be walking out to standing ovations on Oprah, like every week.

Blind kid learns piano with his feet, have Dudley escort him to the piano bench, watch the ratings double.

Instead, Soames chooses this to be the last thing you see before you die.

Scarface is a b*tch next to this guy. 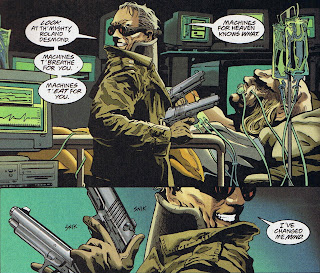 Torque was eventually taken down by Nightwing and sent to jail but again, Soames won't roll over and die. Instead, he marks his time until he can plan his escape by... well, effin' with gen pop just because it brings a smile to his face. 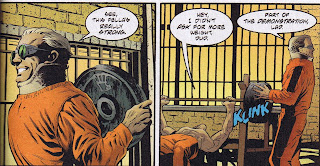 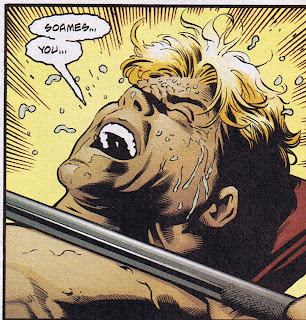 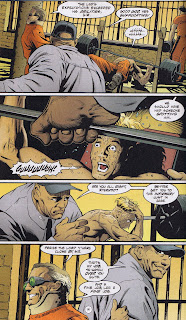 And, what a smile it is.

Soames, ever the manipulator, found a way to break out of prison using the superstrong prison guard formerly known as the Batman villain, Amygdala. From there, things rapidly went downhill for Torque.

He got a new writer.

One so shockingly involved in the story they wanted to tell and seemingly lacking any desire to tie up plotlines they didn't feel like dealing with, simply... killed off... Nightwing's only arch-nemesis of note... and proceeded to take one of comics' more interesting titles down through the use of some of the most awkward storytelling paths ever conceived.

Soames, if allowed to live, could have graduated to Batman villain status. On look alone, he had everything you look for in a Batman villain. He was utterly without morals and in the ultimate bit of irony, it lead to his becoming utterly twisted.

It all ended and for no good reason, at all. Damned, damned shame.

Just a total f*cking waste of a great, great character.

I can't do much about changing the past but if I could ask for anything for Dudley (Torque) Soames, I'd give him exactly what he deserves... 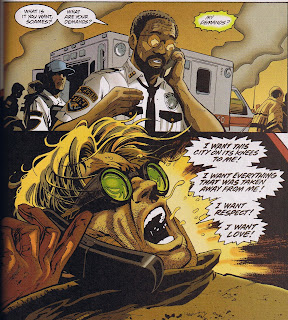 All the love in world to ya, Dudley.
You had me at, "I want this city on its knees to me!", you magnificently ornery bastard.

Comments:
And that's another character who dropped out of sight when I wasn't looking and wound up dead. You're two for two this week, man.

You're right -- that IS a crying shame.

Gorilla heart transplant. Man, I think that would be the coolest effing thing ever.

What were the circumstances of his death? Remember: Resurrection's easier than ever the DCU!

Though imagine what legacy characters based on him would look like...

Torque was lame: it was Dixon trying to make Nightwing into even more of a Junior Batman by trying to give him bizarre villains. Torque certainly deserved whatever death he got.

At least he was better than Lady Vic (or any other Dixon villain). But that's damning with faint praise.

Everything I knew was wrong.

Thanks for showing me the path to VJM enlightenment.

Worst idea for a villain ever.

But does that actually make it the BEST idea for a villain ever?

You made the call.

Torque rocked, as did "Nite-Wing".

I don't have anything good to say about a certain person's stint as writer of Nightwing, so I won't say that it was an ill-conceived out of character train wreck of a story.

Who was the writer who killed of Torque? My gut says Devin Grayson, just because she also decided to kill of Blockbuster.

Dixon gave Nightwing a pretty healthy rogue's gallery without making "Two Face Jr." or "Joker Jr." or anything like that.

I can't believe after all this time, you're actually succeeding at making me soften on the Torque issue...

Ironic that the biggest remaining complaint about Nightwing is lack of a personal Rogues Gallery.

And speaking of missed opportunities, practically all the art featured was Greg Land before he started relying on the lightbox. Great stuff!

One of the only times I was able to get a non-comic-reading friend of mine to check out comics was with a few trades of Dixon's run on Nightwing. Said friend enjoyed them, in no small part because of the coolness of Dudley Soames.

Dud was in that "Batman-villain sweet spot," that zone halfway between regular comic badguys and Dick Tracy villains.

Dixon's idea of making half of Nightwing's rogues' gallery be dirty cops was a good one. It added a tasty flavor to the series.

Torque was a victim of the Great Chuck Dixon Purge. When Chuck left DC for Crossgen, most of his creations started getting killed off. Torque, Blockbuster, Nite-Wing,...most of Dick's villains, really. Then Spoiler, of course. I think possibly even Chuck's Z-listers like Stallion, Amygdala, Brutale, and Hellhound.

"Gorilla heart transplant. Man, I think that would be the coolest effing thing ever."

Oh right, Blockbuster needed a huge heart. And one of his flunkies supplied one. Because he was a escaped criminal from Gorilla City.

Ah, Grimm. The post-Crisis "Gorilla Boss of Gotham." Did he get killed off too?