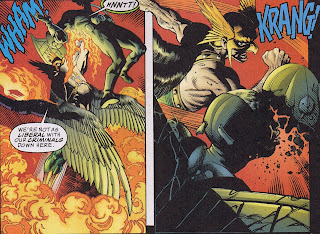 Things that fly in Gotham City, literally, don't in Hawkman's world. To Hawkman, your rights come as fast as he can throw them. 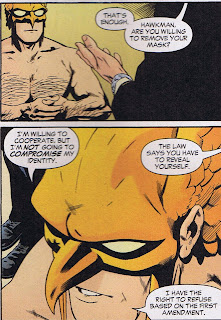 If Hawkman were to visit the Marvel Universe, Civil War would have been over in one panel.

Comments:
Hawkman may be the least emo character in the history of comics. And I like it!

Badass. I see why Hawkman still puts butts in seats. Or something like that...

And people wonder why I love Hawkman. Seriously, print out this post and hand it out to the DC offices as New Hawkman Writer Orientation.

Seriously, Hawkman wouldn't wuss out at the last minute.

Of course, Hawkman wouldn't have taken the fight to a highly populated area, but maybe that's just me.

Dude, the worst would be when Iron Man and Reed Richards tried to clone Hawkman and the universe ended because two pairs of balls that size can't exist without ripping apart the fabric of time and space.

I admit to feeling a bit let down by that final panel. instead of invoking his First Amendment rights, I kind of expected Hawkman to say, "Yeah? Well, kiss my big feathered ass."

What issues are these images from?