Many have stated, "I don't know how you guys continue to keep The Big Monkey Podcast staying so damned awesome! God, I want to have my funny babies with you."

I have miraculously made 21 kids in the past 6 months.

Now it can be told: what it takes to put together a Big Monkey Podcast.

Like The Justice League, we all don't live in the city. Many of us live on palacial estates overlooking the poverty, crime-stricken cities. At least I do.

Every other Thursday the call goes out. The red phone rings. It's Scip's manservant Paco, telling us it's time to assemble. I remove my smoking jacket and kiss my new wife good-bye, heading to the elevator, leading to my personal underground subway car which leads to Big Monkey Comics, various archery ranges & strip clubs.

Ben, resplendent in jodphurs and after spending the day perusing his steam-powered Information-Scope 20001, is the first to arrive at the store. Ben, having bathed in lilac-scented water and having read a stack of "girl comics" is prepared to moderate that which no sane man would.

Jon Brooks is next to arrive by a dune buggy powered by the sound of a million "Excelsiors!" Brooks is the hardest to corral as his day job as a world renowned voice coach/cicada specialist keeps him busy around the world.

Jon Carey is next, swooping through the window on a silken line, disheveled, gun at the ready. Ben, who has become expert at this point, patches him up, hands him his "medicine," props him in front of a mike and awaits "magic time."

Scip, as always arrives via golden spaceship, fashionably late (tipsy) and complaining of exhaustion, having freshly returned from spending too much time hanging out in various Macy's with new best friend, Tim Gunn. Scip is then led to his special chamber where he is bombarded with his essential "re-vita rays," which we don't have the heart to tell him, is actually just a buffet table with extra heating lamps.

Soon, I arrive. Before the podcast can begin, we lay hands upon a stack of Hot Stuff comics and pledge to uphold "The Blogger's Code," which basically says we'll use spel-chek whenever possible.

Next, the roast pig is brought out and they sup upon its flesh. I don't eat meat. I draw sustenance from the love of my many, many female admirers.

Next, the table is cleared of all debris, the lights are lowered and we sit at our chairs emblazoned with our unique symbols and attuned to our individual bio-rhythms.

Our golden cups raised, we let out a yell. 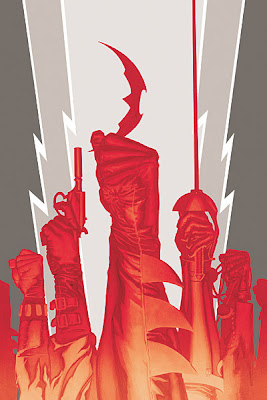 ...AND THAT IS THE BIG MONKEY PODCAST!

Comments:
Well thanks a lot Devon. The magic is gone. In its place is a dark, dank scary place.

Wow, I simply assumed you all just stayed in the store after closing time and continued having the exact same conversations you engaged in during business hours.

(Although I strongly suspected Carey was a souse, so I'm happy to see I was right on that front.)

But all that technology and you can't get a phone line to work in tha place?

That is almost as funny as the truth...!

I KNEW that's how it was. I just knew it.

Gosh, this sounds better than the Drones Club!

And here's a little female sustenance, thrown your way, Devon.

"But all that technology and you can't get a phone line to work in tha place?"

Congratulations on the new wife!