Just got done reading Justice Society of America #10 and after seeing this scene... 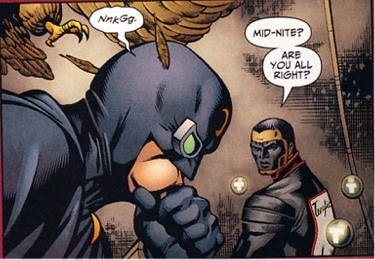 Who'd've thunk it, it makes me believe those old Chuck Austen Superman trades... 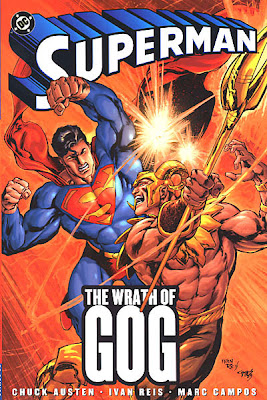 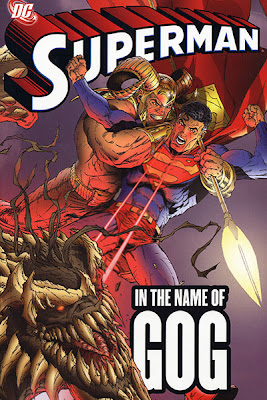 ...just may have some use after all.

Comments:
I don't get it. And I want to, because I like Dr. Mid-Night, I read those Austen trades, and, well, I like funny things. But I'm not sure what you mean (unless it's that the Austen trades made Mid-Night throw up. Or could be used to clean up his throw up. Or something). Anyway, please explain?

Go back and read the two letters that the doctor was carving.

Heh, I caught that too. It ties in well with the Kingdom Come Superman being there.

I'm wondering if this is a key part of Infinite Crisis unfolding. Beware the over armored, shoulder padded "heroes"

-gyuss
If it is, it's been done and noted already.

What's the significance of the cough?

Glad I'm not the only one who came to that conclusion...

Some people are saying the cough/black smoke is a sign of him turning into the Kingdom Come version of Dr. Mid-Nite...which was a "living void" in the trademark cape & cowl that billowed smoke

So with Wildcat II, we're really getting the pieces of the Kingdom Come universe out there. What's next? Will Alan Scott head off-planet?

Gods, I hate Kingdom Come. It's what the DCU should be rejecting, not embracing.

The problem I have with "Thy Kingdom Come" is the idea of strip-mining a decade-old story and presenting it like it's something new, and that Alex Ross is still this big innovative creator, when "Kingdom Come" itself was basically "Squadron Supreme" with much better art and a HUGE increase of Bible-thumping.

Not to mention that Ross publicly castigated Mark Waid for cheapening their effort by doing "The Kingdom," and now here he is doing the same thing a few years later.

Johns is usually great at taking classic stories and giving them new contexts or updates. The more slavish adherence I see to what came before (Wildcat II, Doc Mid-nite going black mist) is probably Ross' influence on the story.

I do give them kudos for bringing Obsidian out of the closet, so to speak.

Martin: "Not to mention that Ross publicly castigated Mark Waid for cheapening their effort by doing "The Kingdom," "

See, even Alex Ross can't ALWAYS be wrong. Everything that was bad about Kingdom Come (which was everything except the art, imho) was made worse, much worse, in The Kingdom.