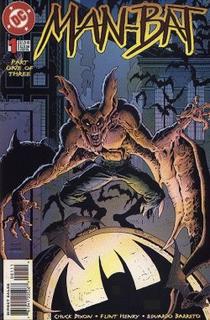 I'm sorry you just cannot make me like this guy. Look at him! He getting guano all over the Bat-Signal! I just never "got" him. Yes, he's was a member of "The Batman Family" at one point.

It sounds like the type of character I would have concocted at the age of six.

"Hey, Mommy! I just got done reading this Batman comic! I like Batman and Robin. I created a new friend for them. His name is Man-Bat."

He sounds like the type of character Marvel would have created in an effort to be clever. Oddly enough, DC beat 'em to it. Not "clever."

Comments:
At Marvel, he and the Lizard could be best friends! And I guess Killer Croc, too, since you guys wanted to send him over at some point...

I've always thought that Mat-Bat should have just gone all the way evil and started injecting people at random with his Bat-Serum. A thousand bats taking to the hills and turning the Bat-Cave into a Bat-Themed version of Gorilla Grodd's Gorilla City.

If he were a Marvel character, they could have published a "Giant-Size Man-Bat" comic back in the day...

He's a Jeckyl and Hyde character who can fly. What's not to love? Beyond the obvious play-on-words name, he has potential.

...and that's why Marvel needs him.

You think maybe Man-Bat could carry The Creeper with him on the trip? Man-Bat's got those prehensile toes and Creeper has an oh-so-grabbable fur coat. Really, they should go as a package.