In 1941, Gregory Sanders, a singing cowboy in the tradition of Roy Rogers, wrapped a hankerchief around his face and fought crime as The Vigilante. Sixty-four years later, the concept was deemed strong enough that he was selected as a member of Cartoon Network's "Justice League Unlimited." How sweet is The DC Universe that it can still find room for a cowboy...and unlike Marvel, they didn't have to inexplicably "make him gay" to get your attention. I love this character even sans his little Asian sidekick, Stuff.

"Seven Hells!" in cooperation with The Absorbascon has been offering characters up for "donation" to Marvel based on the character'(s) strengths and weaknesses or simply their inability to "fit" into The DCU.

Vigilante II, Judge Adrian Chase never sang anyone a damned song and put a bullet in his own damned head upon realizing he'd never be as good as a singing cowboy...and that his name was Adrian. 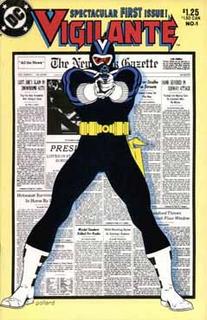 Vigilante III was a former Gotham detective framed for murder, later becoming a...you guessed it...Vigilante. She was last seen as a member of DC's SECOND group of Forgotten Heroes. (Now, how f****d up is it that there's not one but two groups of Forgotten Heroes?)

Vigilante IV will be unveiled by DC Comics in October.

I plan to scratch my sack in October. 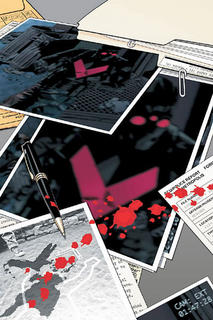 DC, abandon the grim, the gritty. Stick to singing cowboys.

Comments:
Fortunately, as far as Greg Sanders is concerned, nobody actually saw a body at the end of Seven Soldiers #0, so I hold out hope...

Yeah, but Vigaliante II once got written for two issues by Alan Moore...

Blue Beetle got written for twelve issues by Alan Moore and it didn't save him.

Vigilante II should be in the DCU.

#1) The Punisher renders the Vigilante redundent in the MU.

#2) Hydra would just bring him back from the dead in the MU anyway.

Not to dredge up a months-old topic, but I think he means Nite-Owl in Watchmen when he says Moore wrote Blue Beetle.