I was asked the other day who my favorite Black DC character was. People ask me that alot, I guess, because...well...I'm Black.

The choices, surprisingly, were vast. Was it Cyborg, current leader of The Teen Titans? It could have been Lucius Fox for business acumen, alone but also because we share a common thread. We both run businesses,allowing crazy White guys to do other things. ;-)

Was it Vixen for her beauty.

No. Though, I adore each and every character I've mentioned, it's not one of them. No, my favorite DC character of color is Michael Holt, Mr. Terrific. Why? He reminds me of someone and and for the longest time I couldn't remember who it was. 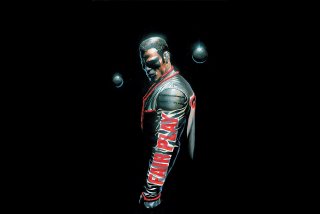 One of the most interesting men alive is world renowned pediatric neurosurgeon, Dr. Ben Carson. Dr. Carson is everything I am not. Soft-spoken, brilliant, humble, a father, a man of faith. These are qualities I admire but don't necessarily wish for myself. I admire them in others, though. Mr. Terrific possesses the same attributes. Dr. Carson is a real-life Mr. Terrific...just minus the kick-ass leather jacket and the backflips.

Mr. Terrific came to mean something to me for one simple reason: When The Justice Society needed to appoint a new chairman, the job went to Mr. Terrific. Why? He was simply the best man for the job. Not the best Black man for the job. The
Comments:
"We both run businesses,allowing crazy White guys to do other things."

THAT made me laugh so hard the dog started barking!

I like the fact that he's cool, smart with 6 pHDs and yet...NOT a rapper, pimp, gang boss, or Green Lantern's loveable,ethnic sidekick!

A few more years of character growth and I think he could carry his own book. The only problem is getting someone smart enough to write him. So many super genius villains-heroes are written like complete buffoons!

Not to mention the fact that he's a black superhero WITHOUT the adjective "black" in his name!
Actually, I'd love to see Mr. Terrific in his own book, with a chance to handle some less than cosmic earth-shaking missions and without the entire JSA at his back. I can see him with a sort of Batman meets Iron Man (for the gadgetry) sort of vibe.

I'm a pretty big Mr. Terrific fan, too. I think the the big "T" on his face is a cool, original concept, and his jacket is pretty swank. What do we know of his origin, anyway? I'm scared he does have one of the frustrating cliches in that he was a "superstar athlete until tragedy struck" a la Cyborg. But I am excited that his past remains gang-free.

I think an interesting story could be told about his relationship/lack of relationship with J.J. Thunder in JSA. One where everyone thinks that a young black hero and an older, more established one should have everything in common, but when you look at their pasts, they have nothing in common except skin color (and, of course, the superhero thing).

Terrific origin was told in Ostrader's, um, terrific run on the Spectre. He's awesome at everything, including athletics, but his wife died in a car accident and it shattered his faith in God. (Oddly, meeting God, or at least the Spectre, did nothing to help him recover it).

However, he WAS inspired by the golden age Mr. Terrific to become an inspiration for the youth of today, a role model that wasn't a "rapper, pimp, gang boss, or Green Lantern's loveable, ethnic sidekick!"

And yeah, super-genius as a superpower is hard to write, because he can only be as smart as the writer is. But I would love to see an Aaron McGruder/Kyle Baker Mr. Terrific series.

I would totally read a Mr. Terrific series. Gail Simone created an anti-Terrific (can't remember his name) in Villains United, I want to see more of him. (Although he's the anti-genius who always gets things wrong instead of right...) Actually, since I think she's done such a good job writing Oracle (as well as Calculator), I'd like to read her take on Mr. Terrific, although I don't know if she'd be the best person to write his series.

I respect Dr. Ben Carson, but I would hang out with him if he did backflips... or if he had Terrific's floating T-spheres. Those things f@#%ing rock! Like Phantasm, but more badass.

Sadly, we'll probably never get to see a Mr. Terrific book if the rumors about DCU bringing back the multiverse turn out to be true and the JSA gets shunted off to some Earth-2 backwater. Jeez, can't we ever just let superheroes age?

Mr. Terrific is one of my favorite superheroes. He's Batman with a better public relations strategy, and a very cool costume. It also wouldn't surprise me if he's got a higher intellect than Batman. I know Batman is a genius, but Holt just seems a step above.

I'd love to see Holt become president of the US in the DCU. He just seems like he'd fit that role.

As long as super genius heroes outnumber (and super genius villains vastly outnumber ) the supply of super genius writers available to write them, we'll still be annoyed by stupid behavior and dumb dialogue by supposedly-real-smart characters. Which is what makes a Mr Terrific monthly title a risky proposition: sooner or sooner-yet he'll end up being scripted by a writer much dumber than himself. And it will be really annoying when it happens. Still, I'd buy it.

Mr. Terrific is a great character, and personally, given the developments in the current Batman title, he's be my choice to take up the mantle. Not that this would ever happen, and besides, he's a great chracter in his own right! As far as not having "Black" in his name, he even made a joke about that when he met Black Lighting in Infinite Crisis. "You actually call yourself that?"