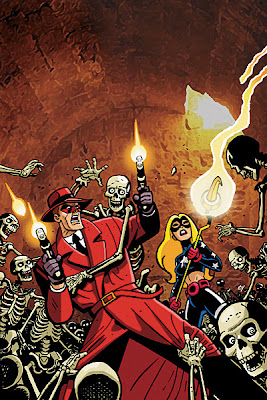 1. How brilliant was it in 52 #50, Captain Marvel's going and doing exactly what a teenager would by changing Black Adam's password?

2. Is it just me but why is it so much easier to stomach The Dibneys as mystery-solving ghosts than as members of The Justice League?

3. If I can buy Mr. Terrific as a member of Checkmate & The Justice Society of America, why am I having such a hard time accepting Batman in JLofA and The Outsiders?

6. Why does Earth 50 excite me more now than ever?

8. Is "Jimmy Olsen Must Die" comics' ecquivalent of "Save the cheerleader, save the world?"

9. Will we ever see a return of a kindler, gentler Wonder Woman?

10. Is there anything more simplistic "The Terrible Trio?''

11. Why'd they have to go and complicate it in this week's Detective Comics?

12. How crazy is it that in Doctor Sivana's world everything can be solved by eating a child?

16. When are we going to get the ineveitable team-up of the Joker's Daughter, The Riddler's Daugther and Ra's al Ghul's daughter, Talia?

18. How wild is it that the future of The Multiverse is in his hands?

19. How cool is it that Zatanna works from home while wearing lingerie? (Superman #662)

20. The teaming up of DC's first super-hero, The Crimson Avenger with the DCU's youngest and brightest character, Stargirl is why I love, love, LOVE DC Comics. (Justice League Unlimited #33)

Comments:
All the women I interact with work out of their homes while wearing lingerie.

1. So was he using the Wisdom of Solomon or the wiles of a teenager? I hope they let us speculate about the word for years. And how long would it take Adam to say every entry in a good-sized dictionary? (I'd be disappointed if the magic word is "aardvark.")

2. Maybe it's easier to marginalize ghost characters if you don't like them. If they're part of a team you otherwise enjoy, they become hard to ignore.

4. Sounds like Batwoman has been resting up from her knife wound. She will reappear exactly when somebody is ready to write her again.

5. I'm late to the party on Ted, but his recent prominence made me want to read more of his stories.

6. Because it's been switched from a separate publishing enterprise to a member of the megaverse club?

13. Yes. I'm hopeful DC will have enough shazam for lightning to strike twice, but I have the same fears for Countdown that I had before 52. 52 wasn't perfect, but it was wonderful, and something that could be hard to live up to.

2. It's only natural, as the original Elongated Man series concept was basically "Quirky Detective Stories." I loved this twist, and had to kick myself for not imagining it as a possibility....

4. That's The Question, isn't it? (My gut and Trademark Sense says Yes.)

13. Yes! But it sure was a good run. (And if it didn't end, surely the writers would go mad. Or madder than their current state of insanity, as the case may be.)

15. Hmm, I'll have to take a second look at that. It's definitely underspelled, and the two could be connected.

19. Indeed! Though an open question is whether Jet Dream is sexier than Lady Blackhawk....

6. Authority/JLA, and the look 'Bruce' and 'Clark' will inevitably have on their faces after meeting Apollo and Midnighter.

2. I had no issue with the Dibneys as Giffen-era Justice Leaguers. I think Ross & Co. did a lovely job of explaining why Ralph was a Leaguer in Justice #10 (or was it #9?)

13. No. That said, looking forward to Countdown.

17. Would Dr. Light II be considered Mid-Crisis? How about Little Boy Blue and the Blue Boys?

16. When Bruce has an actual child, not just some hard case foster kid. Maybe against Jason Todd?