With the revelation in 52 #52 of an all-new Multiverse, we here at "Seven Hells!" thought we'd show at least one of the Earths that didn't make the cut...

Ladies and gentlemen, Marvel at Earth 90!
On this earth, all there is is the sound of... 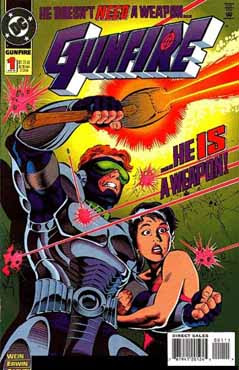 GUNFIRE, THE AURAL ASS-ASS-IN!!!!!
"He is a weapon." A douchebag is a weapon?
In a world fraught with danger, you need a man willing to wear a wifebeater while throwing out the rulebook. In these dark times, you need a... 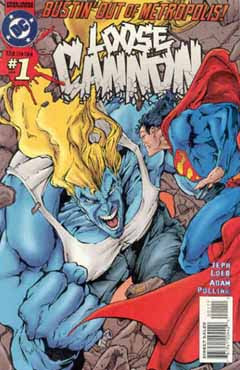 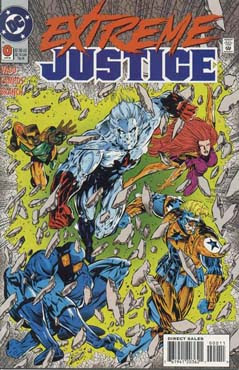 A world where Blue Beetle lives to kick your azz anutha day was brought to you by the fine folks who also brought you... 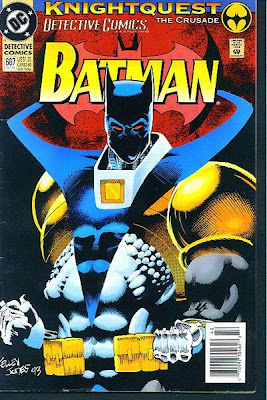 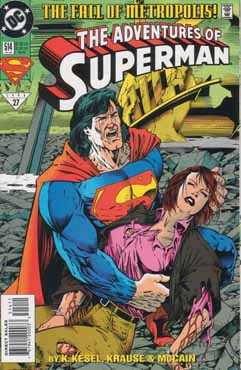 *Note: This is to be read whilst listening to the opening strains of White Zombie's "More Human Than A Human."

Comments:
"A douchebag is a weapon?"

In the hands of an expert, yes.

Funny you should mention Loose Cannon; I just learned today that he was, at one point, in the Justice League.

Now we know whose chair Geo-Force sits in ...

I had heard so much great stuff about Morrison's JLA run that I picked up the first trade, and the story was fine, but the art put me off so much that I'm not going to get any more of it. I'm sure I'd enjoy the story; I just don't want to look at it.

And Ponytail Superman! Cuz that was a great look!

All true... but I'm still in analysis to recover from Viking Aquaman, buzz-cut Black Canary, Maxima's sex tantrums and, and, in Extreme Justice, the Mighty Robot Psychic Talking mecha clone of Gorilla Grodd.

It kills me that this is the thing that you pulled out of that picture as being most noticeably wrong. I'm concerned with those muscles underneath his pecs (why does it look like a bag of marbles?), with his tiny head (I'm having flashbacks to Rob Liefeld's Captain America — help, please), and with his utility belt (how the hell is that thing staying on?).

Ahhh...the 90's. Whatever in the world were we thinking? Almost as embarrassing a decade for comics, as the 70's were for music and fashion.

That whole Extreme Justice thing in particular just makes me cringe. Booster and Beetle are NOT extreme!

and people wonder why Jean Paul Vally had to die

No wonder my neighbor gave them to me for free.

It's been almost 7 1/2 years, and Earth-90 still gives me horrible nightmares.

And I will remind you that my comic lasted for One Hundred Issues. Can Loose Cannon claim that?

For teh record, it wasn't a mullet when it was illustrated correctly. ;-)

And yeah, I _LOVE_ Morrison's JLA, but I _HATE_ the artwork. However, Howard Porter's the only one to draw Clark with long correctly (chin-tickling spit curl and all).

Damn. There were maybe forty typos in my initial comment...

You know what I mean.

Hey, Devon...great stuff! In fact, it's got great MEME potential....where everyone contributes their own alternate Earth that didn't quite make the cut...or map out some of the Earths that did, that DC didn't quite get to in 52 #52.

If it sounds good to you, I can run with it (with proper credid to you, of course).

This happens to be the Earth I live on, complete with the theme music. :)