I keep hearing word that DC Comics is going to bring back The Suicide Squad. 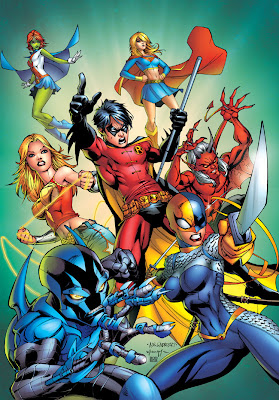 Teen Titans: Like The Suicide Squad, only with a higher mortality rate!

Comments:
Oh my. Now that IS a super-secret task force. The X-Men comparisons were just a cover.

Cuz the X-Men die about as often, but they never die for real...

You forgot Golden Eagle and Gnarrk.

Dude, how can you have a team with megapowerful Supergirl on it? Legion has like eighty members and she still did all the work.

I'm looking forward to the Rolling Head of Ravager. In that collection of appropriate youthful versions of JLA type level, stands the occasionally psychotic one-eyed daughter of their archenemy.

You forgot Jericho, Bushido and Cyborg (who was a brain-dead automaton driven by remote-control following Titan's Hunt).

For completeness' sake, don't forget about Phantasm -the Titan's answer to Tomorrow Woman.