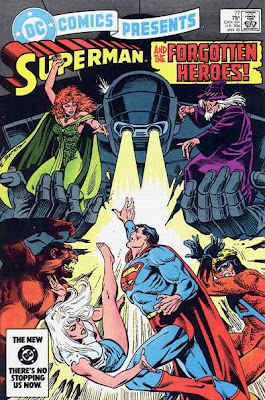 Ah, the comics of my mis-spent youth. In the mid-Eighties, DC Comics could get me to pick up nearly anything with an Eduardo Barretto cover.

I remember seeing the cover to DC Comics Presents #77, not knowing any of the characters on the cover (other than Superman, of course) but instantly falling in love with the leggy platinum blonde in the Daisy Dukes, the monkey and Aquaman's ugly dressin' cousin to the right of Superman. How could one not? They were after all rendered with grace by the sainted Barretto. From this cover and the story contained within, I learned about eight supposedly "forgotten" heroes:

With puberty some twenty years behind me, I thought we'd take a look at the status of The Forgotten Heroes:

Animal Man: 19 years ago, Animal Man was re-re-introduced to comic fans with a new series written by Grant Morrison. Morrison wrote the first 26 issues with critical and commercial success. Animal Man even went on to briefly join The Justice League. Animal Man is also one of the few DC Comics characters with the ability to cross between the DC and Vertigo universes. Animal Man was last seen playing a key role in DC weekly maxiseries, 52 and is also slated to be one of the main characters in the upcoming Countdown To Adventure mini-series.

Dolphin: After meeting Aquaman in the pages of his monthly, Dolphin had a brief romance with The Sea King. Later, Aquaman's former sidekick, Tempest, the former Aqualad, met and fell in love with and married her. They've since had a child and after an attack on Atlantis by The Spectre, her and the child have gone missing.

Rip Hunter: After aiding the bringing about of The Multiverse, Rip Hunter is due to play a major role in the upcoming Booster Gold series.

Dane Dorrance: After re-forming The Sea Devils, Dorrance has recently been seen in the pages of Aquaman.

Cave Carson: Recently seen in the pages of JSA helping rescue Sand from the earth's crust.

For a bunch of Forgotten Heroes, not too bad, huh?

"Which DC Universe characters deserve to be "forgotten?"

Comments:
Ooooh! Oooh! I get to the be the first person to say 'Geo Force'!

to keep things in the family:
Terra.
She has dies and come back...what three times now?


I mean really... Its like if they kept on bringing back Ferro Lad every few years and keeping everything else in continuity. Except that one of the Ferro Lads would not actually be the same guy...he just liked the name...or something... I try to blot out mid-90's Titans... its better for my sanity

Resurrection Man was revealed to be Immortal Man, wasn't he? One of the last issues of that series (#25) featured ResMan teaming up with the (new?) Forgotten Heroes

oh, and to answer the question (of who deserves to be forgotten)...For my pick of 6, I would go with Resurrection Man (or Dial H For Hero as an alternate), Red Star, G'Nort ('cause everything is better with a 6-foot tall alien dog hanging around), Onyx (where's she been all my life?), Tasmanian Devil (alternate, Tigorr), Neptune Perkins.

Now that's a team I can get behind

Hmmm. Now I'm thinking about all the great characters DC has apparently forgotten all about. That might be for the best, though, lest they end up getting stabbed by Deathstroke or their head knocked off by Superboy or something.

Anyway, here are a few I'd like to see make a comeback:

Can't DC just forget some of the Green lanterns? I mean, Hal Jordan is great and all...but Kyle and John? do we really need so many Lanterns in one little planet? get rid of some of those guys, come on!

Who were those villains on the cover? I bought that back in the day but I must have killed the brain cell that info was on...

Those are the Forgotten Villains, beleive it or not (hey, hold on, what's Mera doing with them?).

No wait, it's the Enchanteress (went on to star in Suicide Squad for a fair while - in Squad terms), plus Kraklow (18th century Polish sorcerer supreme) and Ultivac is the big robot. The team also included Mr. Poseidon (Ultivac's controller), Yggardis the Living Planet (lawsuit pending) and the Faceless Hunter from Saturn, who might just have been Chameleon Boy without a face.

As for who should be Forgotten, if you mean for real and forever, I don't think we need to mention the Bloodliners, since they already have been. Except Hitman. Hitman is still da bomb.

If you mean Forgotten like these guys were, i.e. only forgotten to rise as the shiniest of stars, well, we can sit down to talk about it. I'll crunch some lists and come back to you (but Roy Raymond is a good start).

Speaking of Eduardo Barreto, are you aware he's now drawing the syndicated comic strip Judge Parker? Good stuff. He's such a good storyteller that he makes it a pretty good read even though it progresses at the rate of one day of strip time every six months.

All the New Gods. Sick to death of those characters.

The New gods probably deserve to go into one of their own "new earth" Kirby had a very different idea for them than to integrate them with the DCU. They belong most appropriatelly with the Eternals and all of the other Kirbyverse cosmic gods.


You wanna forget some heroes? Justice League Elite (and JL Task Force). Nothing makes LESS sense than a "black ops" Justice League with the word "elite" in the title. It defeats the WHOLE PURPOSE of the concept and ideal of the Justice League.

the Justice League is NOT the Authority and they aren't a bunch of Marvelized X-Men clones wearing overcoats carrying big oversized guns.

Empress from Young Justice
Eradicator
Son of Vulcan from Son of Vulcan
Fury (wait, why isn't she in Amazons Attack!?)
Argent from the Teen Titans with teen Atom
Kid Eternity
Tyroc relocated from the 30th century