The Viking Commando, Lady Cop & My Nose Vs. Philadelphia

Last week, I spent three whole hours at Wizard World: Philly and somehow managed to walk away with no sense of smell.

Yes, you read that right. I lost my sense of smell after spending three hours in Philadelphia.

Some would view this as a blessing, not having to smell that smell only tens of thousands of fanboys can generate in one enclosed space but what I miss the most is me. I happen to smell exquisite, somewhat like freshly baked cake, actually.

Don't worry because I'm not, it's already starting to come back, somewhat. I have many theories as to what could have happened.

One: This is all somehow part of God's plan to get me on Oprah.

Two: Somewhat like Marvel's Captain Britain, my power of smell is somehow tied into my proximity of my homeland. Washington, DC lashed out like a jealous woman, smacking me in the nose to get back at me for leaving her alone too long.

What did I see when I was there? Not much but some awesome things did happen while I was there.

While looking through long boxes, a fella to the right of me pulled out a copy of All-Out War #1 featuring The Viking Commando, saying this to his young son, "I've gotta pick this thing up. I read this guy's blog where this Viking guy was giving out advice."

I was that jackass telling you how to run your life. I've never been prouder.

Also while there, I checked every long box in the place looking for this: 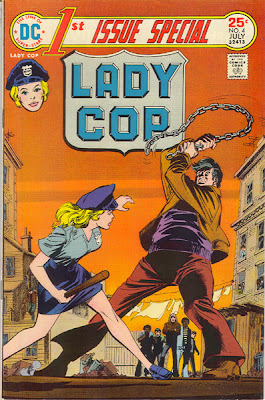 Not a one to be found in the whole place. Oddly enough, the vendors who did have copies of First Issue Special were missing the sainted issue four.

What'd I pick up while in Philly? 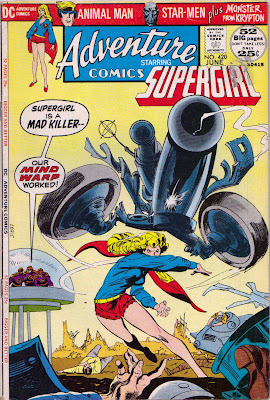 The infamous Supergirl "cannon/c*ck & b*lls" Adventure Comics cover.
Because, yes, I will actually be a twelve year old boy all my life.

Comments:
Good that your parents let you go all the way to Philly then.

I wonder if that guy with the chain would look as gleeful if he knew he was about to take a Lady Cop baton right to the nether region.

P.s. Love you blog, thanks for telling me how to run my life.

A grand moment at the longboxes. You're officially a Cultural Trendsetter now. Hang on, I think there's some kind of diploma...

So when can we expect a full post on the c&b issue?

Poor little girls with V.D. everywhere thank you for your devotion to their cause.