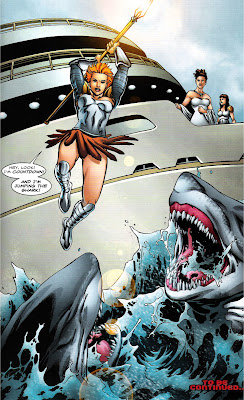 It's taken 24 weeks but I think I'm finally there.

Countdown* has not made an impression on me, at all.

Almost from the first issue this book has been troubled with lackluster art, continuity problems and continuity dependent appearances by Kyle Rayner and The Question (Green Lantern: Sinestro Corps and The Crime Bible, respectively) have had people creators and fans alike, asking if the right hand knows what the left is doing.

Other events such as The Sinestro Corps have eclipsed it in scope and immediacy.

Amazons Attack! did nothing for Countdown but make it feel unnecessary and especially tedious.

Furthermore, as much as I enjoy Countdown's writers Palmiotti, Gray, Bedard, Beechen and McKeever's individual works, they just don't seem to be gelling well as a writing unit.

These are very good writers. It's just that the material they're being given isn't very compelling.

The lead characters of Donna Troy, Kyle Rayner, Jason Todd, Trickster, Pied Piper, Holly Robinson, Mary Marvel and Jimmy Olsen aren't very compelling and just seem to be put in the path of a bullet for no other reason than editorial edict.

24 weeks in and we still don't know their story.

24 weeks in, I haven't been made to feel like I should care about their story.

24 weeks ago, I signed on to see Jimmy Olsen die. According to DC it was something that must happen. 24 weeks later, Jimmy is alive and in a sewer, hanging out with underaged boys in his underwear.

This may be as good a time as any to question where this comic is ultimately headed.

For 24 weeks now, I have done nothing but defend this comic and week in week out, I've been testing myself finding new ways to do so.

So, there you have it, my reasons for wanting to stop counting.

"Why do I still want to stay?"
*Thanks to Jon Carey for the image.

Special thanks to Jon Carey for the popozao new banner, too.

Comments:
I'm with ya, Devon.
COUNTDOWN is probably down for the count with me-- it hasn't been worth reading for awhile now, but I've been buying it like a mindless robot.
No more.
Think I'll drop it off my list. If anything, y'know, interesting happens, I'll sign back up but for now... hasta la bye-bye.

I actually really like Countdown. In fact, I want to give it a hug. Because apparently, I hug people, regardless of whether they remind me of Sammy Davis Jr.

The only reason, and it's a stupid one, that I'm sticking it out is to say I that I was there from the beginning to the end, even if it wasn't good.

I totally agree. Like you say, it's been 24 weeks and nothing has happened. Nearly all of the stories are in exactly the same place now as they were months ago - Ray Palmer isn't on any Earth, Jimmy Olsen's powers don't make any sense, Mary Marvel is dark and that's kind of weird, Piper & Trickster are running to nowhere. It's just never-ending sameness.

In poker, they call it "pot committed."

You've already paid for half the story -- not just with money, but with time and interest -- and are now following up that commitment with more spent time and money. Despite fearing a bad outcome to it all.

I'd be doing the same thing at this point, if I hadn't given up after 7 issues.

It's been a nice re-intro to the DCU for me, but I may cry if it doesn't get better.

I think I know why people are sticking with Countdown... the story has been awkwardly paced from the beginning. They try to show every plotline in every issue, and therefore no issue covers a plot point satisfactorily. But the thing it has going for it is the writing. The writing is actually good. It's a smooth read that follows the art pretty well, and there have been some good one liners. We keep waiting for the shoe to drop... for something to happen... but they never promised us big happenings... they're giving us exactly what we should have expected: a tightly written book that's counting down to something big. Plus... newsboy legion.

The book just sort of treads water, and seems to do so by editorial edict:

In Week A, Piper and Trickster seem like they are caught dead to rights by GUEST STAR, only to get away in Week B, wherein they run into SHADOWY FORM OF NEXT WEEK'S GUEST STAR.

Likewise, Jimmy Olsen displays this power, then that one, visits this team, then the other, then this scientest and that lab, but without ever actually doing or learning anything.

It all seems very regimented. You can almost see the Dini-notes that list what needs to occur in each storyline in any particular issue.

I was going to subscribe to Countdown as I did 52 but forgot, and I'm kind of glad I did. Most of the issues I've bought haven't necessarily been bad. Just lackluster. Very, very lackluster.

I liked seeing the Newsboy Legion clones again, though. 90s Superman comics will do that to ya.

I don't know if it was because I couldn't breathe anymore or just because it was that funny, but the lightning round this week made me cry. And Devon, you're getting hugged when I come out of my insomnia coma later today.

Meh. I guess I keep showing up on the hope that something...anything will happen soon.

That, and I REALLY want to see Kyle drop-kick Jason Todd into another dimension.

Proud to say I never bought a single issue of "Countdown." I knew that thing was concocted from the body parts of Frankenstein's ugly brother Failurestein on the first look.

The whole trick of "Countdown" is the writers playing on the reader's desire to see what happens next. But nothing can actually happen in Countdown until it's time to move the next phase of advertising Final Crisis forward, so they bank (literally) on the fact that people will keep plonking down $2.99 a week in the vain hope that something'll happen.

$2.99 x 52 = $155.48. That's money you could have put in your retirement account, bought better comics with, or paid a bodyguard to protect Big Mike from the wrath of insane comics feminists.

I like a lot of the elements in Countdown - Newsboy Legion, Jimmy Olsen, Karate Kid meets Buddy Blank, all of the lead-up to Salvation Run, the Challengers from Beyond, etc - enough to enjoy it. I just wish something would start happening with those elements. Enjoyable on their own, yeah, but it's not making a compelling story. I live in hope that as we get close to Final Crisis things really start to pick up, so I'm still reading, but some weeks it's very close to coming off the pull list. I never expected that it would go this long without anything comparable to 52's "Rip Hunter's lab" moment.

I'm somewhat with Gyuss on this one. For all that Countdown and 52 have failed to deliver, the stories themselves combined with the back stories in most of the issues have not reintroduced me to the DC universe, but introduced me to it. I have always been aware of the main characters in the DCU, but I have only been reading it since around the time 52 began its run.

"Why do I still want to stay?"

Because you're an addict. Your brain knows you're doing horrible, horrible things to yourself, but your body won't stop.

That's the only way these sorts of comics sell at all: they're aimed at comic junkies.