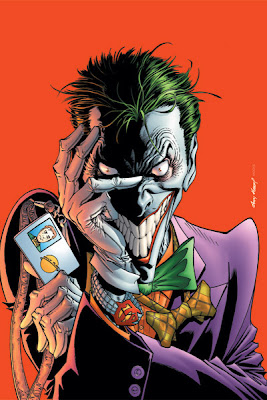 3. Who in their right mind wouldn't acknowledge Batman as THE alpha-male? (Batman #665)

5. Are you as excited as I am that Sean McKeever's going to be writing The Teen Titans?

7. How bad are things in The DCU when the only one making sense is The Joker? (Countdown #50)

10. How clever are those Countdown UPC boxes that countdown along with Countdown?

11. You are reading Countdown, right?

12. Does The Multiverse negate Hypertime?

19. OK, am I the only one absolutely floored by artist Ale' Garza's belt designs in this week's Supergirl #17?

20. Is there anything more "DC Comics" than a "Supergirl vs. Supergirl" cliffhanger/smackdown? (Supergirl #17)

4. You gotta love Tim's reasoning. "Someone beat the crap out of Batman? Guess I'm gonna have to kick his ass, then."

12. I believe the Morrison/Waid Equation is "Multiverse" + "Hypertime" = "Megaverse".

Though showing your work is a pain.

So Jimmy Olsen knows who Batman is, right?

2. Is there a place in the multiverse where cancelled titles go?

11. My shop tried to trick me into it, by adding it to the pull lists of everyone who bought 52. They were met with a resounding "I don't want it" (by me, anyway). No more 52 means I can add a few more monthlies (JLU, Brave & The Bold), which I'm sure I'll get more out of than Countdown.

13. I wonder if Barry will be as boring as Hal has been lately (or is it just me?)

5. At least as exxcited, maybe even moreso.

11. So far. I'm giving it 6 issues, the same as I originally gave 52. I ended up liking that quite a lot, but so far, Countdown has not lived up to my expectations.

15. That messed me up too. I would have liked to have seen that fleshed out a little more than just some off-hand referencing and a one-panel flashback. Screw Green Arrow/Black Canary: this couple's story is way more interesting!

Tim's becoming one of my favourite characters. The only think holding him back is the difference in his portrayals between Robin/the Batman titles and Teen Titans.

5. Are you as excited as I am that Sean McKeever's going to be writing The Teen Titans?

(Seven) Hells yes. Spider-Man Loves Mary Jane is kind of of an anti-guilty pleasure for me. I feel like I should be embarrassed that I read it, but I tell everyone I meet how much I love it.

Now he's bringing real teenager characterization to the Titans? Awesome. Plus, Blue Beetle! I'm wishing as hard as I can that Jamie's mom moves into Titan's Tower to keep an eye on her son.

And McKeever might actually write Robin as Tim Drake, which should fix the problem I mentioned above.

11. You are reading Countdown, right?

Yes, but... Nothing's really grabbed me yet. I had hoped the Jimmy storyline would do something for me, but it's fallen flat. My backup hopes were lain on Mary Marvel, but she doesn't seem to be acting right. So far the most interesting thing has been the rogues, but that may just be because I like the idea of a super villain pizza party.

I don't know what is was, but something in this issue made me love Bart as the Flash. Which is saying something after how much I hated the first few issues of this series.

There was something about the scene in which Bart is charging into a situation that he knows he won't make it out of that had me cheering in my own head. I was... thrilled.

Here was a character that was acting angsty and riddled with self-doubt start acting like he's supposed to: impulsive and heroic.

Never read it, no desire to. The guy at my local comic shop mentioned to me that it was out, and it was all I could do to not to heap my scorn and outrage upon the innocent man.

Now he's bringing real teenager characterization to the Titans? Awesome. Plus, Blue Beetle!
Beetle's joining the Titans? I had not heard that.
*adds to pull list*

I know you said above that your pull list space is limited, so I thought I ought to make clear that McKeever's being very coy about whether or not Beetle's actually joining the Titans.

But then again, he's being coy about any and all details, so make of that what you will.

hmmm, maybe I'll wait then ;) Thanks for the heads up.