Looking back at the previous post, I think I was a bit tad too cryptic... or people actually are that interested in Dawnstar's crotch.

What I was actually aiming for was the fact that we've been looking at things all wrong.

After the re-inststement of The Multiverse within the pages of 52, we've all thrilled at the possibilities involved in having 52 Earths. We've regained Earths 10, 2, 4, 50 and so on, but somewhere in there, one question went unasked.

"Where's Earth-1?"
Some said Earth One was "New Earth," the event horizon for events such as 52, Infinite Crisis and Identity Crisis.

I say that is wrong. "New Earth" is simply New Earth.

Earth-1 has come and we've been looking at it all along. The first clue and most important clue was found in Justice League of America #0. 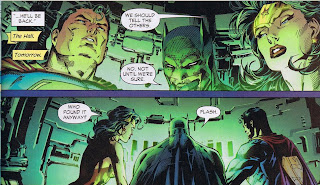 This is The League of Earth-1.
Notice how the Big Three end at the logos? Logos, with characters constantly going between revamps, nowadays are a dead giveaway in regards to timeline.

Notice how they quite non-chalantly mention The Flash as if he were still around? That's because he does. Did you really think they were referring to Bart Allen? Earth-1 exists as a pre-Crisis Earth-1 where Dawnstar lives alongside other wiped-out-of-existence Legionnaires such as Blok. Where Jimmy Olsen can become Elasti-Lad without even thinking about it. "New Earth" Jimmy has only displayed the ability to become elastic once in post-Crisis history. 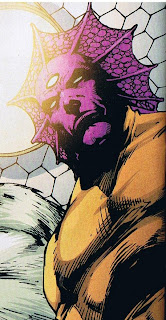 Earth-1 is a world where Despero appears as he did pre-Crisis On Infinite Earths, tunic and all.
Earth-1 has been insinuating itself on New Earth. Not every knows this, though.

Especially "Bowtie Earth-1 Jimmy Olsen." The most telling clue is his surprise at going elastic. "New Earth Jimmy" doesn't do anything but bitch, moan and take jobs from Superman's other pal, Clark Kent. 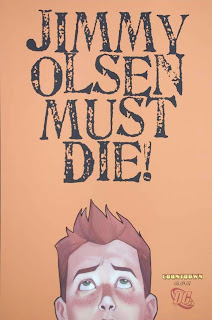 Comments:
I can hardlly wait to see "Crisis on Earth-1" at some point in the future! That's kind of a neat idea, I think...the "discovery" of a Silver-Bronze age Earth!

An earth that will have Dawnstar's crotch!

Earth 1 is pulling a Valis?

So would this mean the final Superman story never happened? Or just not yet?

Wait, Justice League of America is taking place in Earth-1? This is the kind of shite Crisis was supposed to stop.

Please forgive my ignoring the topic at hand, as I--having just listened to the first Big Monkey Comic Podcast--just wanted to add that I believe a certain Nordic Warrior advice column was MADE for the audio format (with your engrossing performace as Black Manta proving that you more than up to the acting challange).

It's not *just* Dawnstar's crotch we're interested in; it's the entire package.

That's a great concept. All this pre-crisis stuff is from the Earth 1 out there in the multiverse, who have just discovered new Earth. Well done.

I don't think Devon's saying that the entirety of Justice League is happeneing on Earth-1; I think he means that elements of Earth-1 are making incursions into New Earth. And, in the flash-forward from issue 0, what we orignially interpreted as the New Earth JLA discovering an alternate earth is actually the Earth-1 JLA discovering NEW EARTH (which is why the picture is of the JLA and JSA members together).

This is the kind of things that drives folks like me out of buying monthly. I know some folks are continuity junkies and love staying up who's who, but some of us just want a good story of people in tights. And that's why we wait for the trades.

The fact that the concept is as potentially as interesting and exciting as you've outlined pretty much guarantees that DC won't do it.

It's a karmic law of fanboyism--whatever explanations we come up with for mysteries or puzzles, the reality is inevitably less interesting.

Gyuss, you might have a point were it not for the fact that the first Crisis happened 20 YEARS AGO. I think two decades is more than enough time for DC to decide that its one world experiment wasn't as creatively fertile as the multiverse model.

I understand where you're coming from. I just hope this leads to something interesting and is not just another event.

This kind of thing seems like a great reward for long time fans, but I don't see how it makes it any easier to get new readers in.

One of the things I've enjoyed about the the Superman/Batman book was that it was fast paced and didn't require me to know the whole goings on of the DCU to read it. I could hand a stack of those to a new reader and suck em in.

I liked Barry Allen better when he was dead. Seriously. He serves the DCU very well as a memory of a great Flash who died int he service of the universe. Why do we need him back? There are already more than enough speedsters to fill his costume.

Also, the Ultra-Humanite ought to be a bald man in a wheelchair, consarn and dagnab it. In MY day, you youngsters...

ok,ok, 4 issues of Countdown have won me over. The backup history of the multiverse actually left me atwitter.

Paul Dini seems to have a special ride planned for us.

Bald guy in a wheelchair, movie starlet, white ape. How come no-one ever mentions the days when the Ultra-Humanite was giant flying ant?

In other news, you are the number one google return for "Dawnstar's crotch." Congratulations!

So that's the big three from Earth-1 and they're looking at a picture of New Earth, right? That's the answer that makes the most sense. New Earth has the heroes from Earths 1 and 2. The way this scene is written though, it seems to imply that they are looking at Earth-2. If that is the case then, the only possible conclusion I can come up with is:
There is a "new" (post-Crisis) version of Earth-2, in which both old and new hero versions exist. The older ones came out in the 40s, the newer ones came out in the 80s and 90s. The explanation is that this is not exactly the same Earth-2 as before. The other Earth-2 ended in 1985 with the Crisis, and was combined with the other 4 Earths. In this new chronology, Earth-2 survived past 1985, during which time a new generation of heroes was born. That doesn't really make sense though, because those are young versions of Batman and Superman in that picture.
Final answer- that's New Earth in the picture (with Hippolyta as Wonder Woman)
Too confusing.

Wow. That could be a *REALLY* good idea, and ties in with my own thoughts, to an extent...

I think there's a very good chance you're onto something here. I hope that your theory's right, 'cause that could actually be entertaining as hell.

Nice detective work, and cool theory whether it turns out to be true or not!