I asked myself, "What the hell is going on on New Earth?!?" 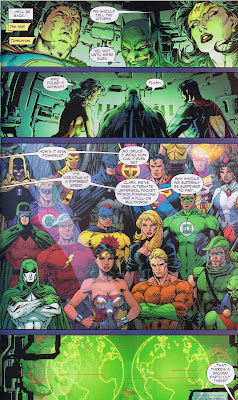 The Justice League of America are looking at old photos of a meeting with The Earth Two Justice Society of America. 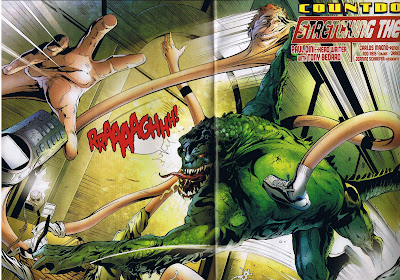 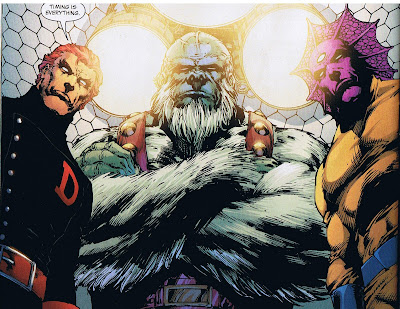 Despero's appearance has reverted back its original horizontal fin and tunic look over his "Savage Dragon-lite." 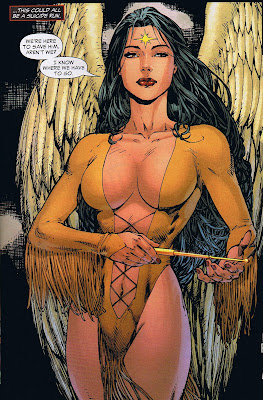 Dawnstar, a character who hasn't appeared since The Crisis On Infinite Earths, has returned in the pages of Justice League of America.

Suddenly, it, no pun intended, dawned on me. I've been asking the wrong question. It shouldn't be "What the hell is going on on New Earth?"

After watching Jimmy Olsen become Elastic Lad, the return of The Legion in their Pre-Crisis uniforms, retro-Despero and old JLA/JSA photos, the question we should be asking is:

"What does Earth One want with New Earth?"

Comments:
Hmmm. Do you know how I could get a ticket to Earth-1?

I can't take another continuity restructuring. DC needs to just stop and let it be for awhile instead of constantly beating that horse.

Do they want our Ring-Dings?

Whoah, hold on a sec...was the page with the looking at the team up pic in the most recent Justice League?

Who cares? Dawnstar is back!! Everything else is gravy.

I was hoping they'd use superstrings or something, instead of just having earths in different 'frequencies' like a radio dial.

Why does Dawnstar have a cameltoe? Does buckskin really cling like that?

The team pic was from Justice League #0..the set up with flashbacks...

I LOVE Multiple universes and the multiverse concept is awesome!!

The great thing is that there is NO continuity restructuring. Got something else going on you don't like? It happened on Earth 547. In theory, ALL stories are IN continuity. THAT's THE POINT.

The team pic from JL 0 is curious. Its got the Golden Age JSA (with the McNider Dr. Midnite, etc.) but with what looks like the 90s Batman with the solid black bat sans yellow.(it COULD be the GA Batman, I guess...but the Superman is also distinctly modern)..but are they looking at ANOTHER parallel Earth 1-2 team up??? That could be interesting (if somewhat confusing) storytelling...

There are only 52 worlds, which was the only 'secret' of 52. And if having Earths-1, 2, S, 5, etc., etc. crossovering with each other led to Crisis on Infinite Earths, why the hell would they start that crap over again?

I think the real problem came when instead of pretending a story didn't happen like Marvel does, DC kept putting stories into other universes to explain why this new writer or that one completely ignored any developments from that story. With only 52 Earths to play with, that can no longer be the case, which I think is why they're limiting the number of universes. But it would still be overkill to restructure 'New Earth' or completely replace it, when Infinite Crisis ended a year ago.

It may not be actual buckskin. It's probably some high-tech 30th Century imitation buckskin that is designed to cling like that. (Or the skin of some alien beast that resembles buckskin but clings.)

And that *could* just be an unfortunately placed seam on Dawnstar's costume.

feh...people worry too much about continuity and not enough about stories.

if ya' don't like that, well too bad! I for one will continue to buy tons of books about Multiple earths..whether they be infinite or finite..but really..what is the difference?

Did infinite crisis/New Earth happen in another sister universe to the "old" one??

And btw..DC was the among the senior of the companies to do the "imaginary stories"..Marvel was "Mr. Continuity" for the better part of their history and even now..its NOT in their innate nature.

I didn't say Marvel put out 'imaginary stories', they just choose not to acknowledge some older stories as time passes.

While Superman is saying that the original Legion disappeared after "the first Crisis," from our perspective it wasn't until Zero Hour. Dawnstar was around after Crisis all the way to the Five-Year Gao, and then came back as Bounty until ZH.

While Superman is saying that the original Legion disappeared after "the first Crisis," from our perspective it wasn't until Zero Hour. Dawnstar was around after Crisis all the way to the Five-Year Gao, and then came back as Bounty until ZH.

Love the multiverses, but that art is so bad, they could make Earth Ninja-Pirate Robots versus Gangster-Cowboys and I still wouldn't read it.

Why don't Degaton, Humanite, or Despero have irises and pupils?

Maybe that's the secret of Earth-1.

For the same reason, I suppose, Dave, that Dawnstar doesn't have any nipples.