2. Did you notice Amethyst, Princess of Gemworld in The Oblivion Bar in this week's Superman?

3. Isn't great to have the actual creative team back on Superman?

4. Are there any members of The Justice League who didn't meet when they were kids? (Detective Comics #833)

7. Was it the return of The Bug-Eyed Bandit?

8. Was it the return of a long-lost foe of The Atom's teaming up with The All New Atom in order to find Ray Palmer? 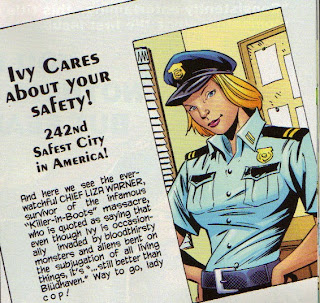 10. How cool was it that Supergirl writer Joe Kelly actually found a use for one of Donna Troy's many existences? (Supergirl #18)

12. After everything she's gone through in Checkmate, aren't you looking forward to the scene where Fire meets Ice, all over again? (Birds of Prey #107)

13. After everything he's gone through in Green Lantern Corps, aren't you looking forward to the scene where Guy Gardner meets Ice, all over again?

16. Isn't it interesting that the ones The Monitors say are "the source of the virus" (Kyle Rayner, Donna Troy & Jason Todd) aren't refered to by their codenames anymore? (Countdown #47)

Comments:
I didn't notice Amethyst, probably because I was too busy trying to figure out if Traci Thirteen was sitting with Witchfire. Nothing against Pacheco and Merino, who did a fantastic job with the issue, but I now prefer the Cliff Chiang Traci.

I'm looking forward to the Guy/Ice reunion too. Hope she's around for a while.

Not only Amethyst, but the Ghost Patrol as well!

Man, love for Guy Gardner but not Kyle Rayner? Ouch!

Booster came back to Earth at the end of 52, at least long enough to get Magnus to fix Skeets, it might be common knowledge he didn't die by now.

And both Scott Free and Shilo Norman are alive and adventuring, last I checked.

But the rest of that is going to suck, yeah.

Maybe she can help cheer up J'onn.

Hmm. I thought Scott Free was still around somewhere, too. Did something in fact happen to him? I will be most peeved if so. Especially if it turns out to be a lame excuse to make it so Barda's no longer tied down. Their marriage is one of those things I just really like about the DCU.

Please let the Amethyst appearance be a harbinger of the release of her original 12-issue limited series in trade! One volume in the tradition format, two in the manga size format, whatever. I could sell the shit of Amethyst at my book store if DC would just make it available to me.

Only in that none of his girlfriends died by sickness.

Shilo got better in the last panel. Mother Box was good at removing bullet, it seems.

How cool was it that Supergirl writer Joe Kelly actually found a use for one of Donna Troy's many existences?

It would be cooler if that purpose hadn't been "the supervillain into whose mouth I can put readers' complaints about my series in caricatured form, so then I can come stomp on all their complaints with my Mighty Monitor Mouth at the end declaring 'one true Supergirl! one true Supergirl!' at the top of my lungs."

This was worse metatextualism-- both more extreme and just more awful-- than any case of "Kyle is the one true Green Lantern" I can remember.

I don't think I said anything about his girlfriends dying from a virus.

Isn't he in the outfit of the Anti-Monitor? Meaning that if he likes this Supergirl, she really is trouble and bad for the multiverse?

Y'know, it occurs to me that I haven't told you how much I flat-out love these posts.

I flat-out love these posts, Devon.

Thanks, Rob and yes, it will be a weekly feature.

I too really dislike Lois's new hair-do. I'm torn by Pacheco's art. For the most part it's awesome, but small things like her hair cut ruin the panels for me. I'd gladly keep the haircut though in exchange for losing some of the more t&a elements of Pacheco's art. -alex p