I've been often been asked (twice) why "Seven Hells!" on DC Comics so much. The answer is always the same: I can write about almost anything but really, what's better than writing about something you care about?

I have simply and deliberately come to care about the characters. Unlike other characters in other universes, the denizens of the DCU are effected by the worlds they occupy. Theirs is a world comprised of absolutes. At any given time, a glance at these characters will reveal absolute joy, absolute heroism and the case of one Bart Allen, the former Impulse, absolute heartbreak.

I have found no greater heartbreaking comic book moment than in Impulse #9.

Bart Allen was born in the future. A future that included a mother and grandmother who loved him dearly. The grandson of Barry Allen, Bart was born with a hyper-active metabolism that aged him so much that at the age of two, he appeared to be twelve years old. To keep his body & mind under control, his family placed him in a virtual world that kept up with his distorted sense of time. Bart Allen, when you get down to it, was a child with very special needs.

When these needs weren't being met within this virtual world, his grandmother, Iris Allen did the only thing she could think of: she sent him to the past where the only person who could help him was.

The Flash of the latter 20th Century, her nephew, Wally West. Overcome with sensory overload, Bart Allen entered The DC Universe absolutely out-of-control. Wally West, the only person able to keep up with this baby trapped in a teenager's body, did the only thing he could think of and hypershocked his cousin's metabolism into what passes as normal for a tweve year old super-speedster.

Now, you would think this would be where, Wally West, the former Kid Flash to Barry's Flash, the only one close to Bart's age who could sympathize with Bart's unique predicament, would take him under his wing.

Wally couldn't deal with the responsibilites involved in raising his only cousin and sent him off to live with a family friend, the retired Golden Age speedster, Max Mercury.

Soon, they found themselves in Manchester, Alabama, about as far away from anything Bart could have possibly perceived as normal.

Finally, Bart had someone his age who knew what it was to have to slow down for a world that crawled where he was inclined to sprint. The funny thing about Jenni was that while in the past all she ever wanted to do was slow down and take things in. 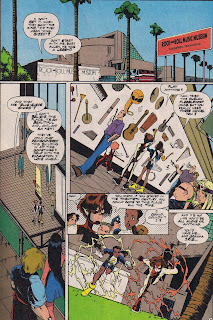 Despite that, Bart comes to the realization that he isn't as alone in this world as he'd once thought. 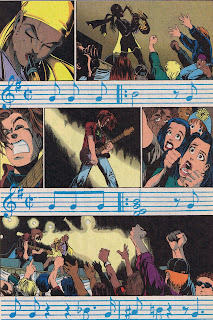 Bart finally finds kinship in someone who understands the rush involved in being an Allen. 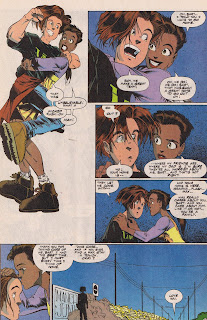 And as quickly as the belonging comes, lonliness revisits at super-speed. 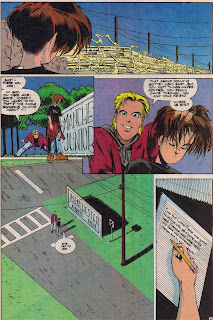 Bart, alone again, does for his cousin the one thing he can't quite ever seem to do for himself: he collects his thoughts, writing them down in a letter. 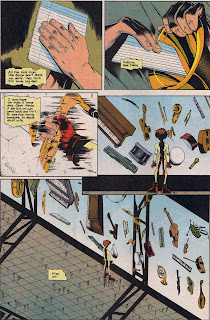 A letter, he can only hope finds the one person who might understand this thing he is going through.

I have no shame in telling you, I didn't realize it until I heard the wet plop. I had actually teared up while reading a comic book. Without knowing it, I had absolutely fallen in in love with the medium, all over again.

Now you've got me worried all over again about Bart's fate in the next issue of Flash.

You know, I never read Impulse, nor was I reading comics when this came out, but man, that sounds like a great story.

Dammit, now you've made me want to buy up all the Impulse back issues I can find! How long did that series run for? And, oh, yeah, I don't have any Young Justice issues, either...

Wow. You know, I'd started reading this issue, but stopped because I just wasn't clicking with it. Now I know I should have read the whole thing through. Thanks for posting this up, Devon

What an awesome post and story. What a great expression of loneliness. Thanks for sharing, Devon.

Let's see... Here in Memphis we have The Rock n Soul Museum, The Stax Museum, Sun Studio and Graceland, but no Rock n Roll Museum.

While I'm glad the writer recognizes Memphis as the birthplace of Rock n Roll, how hard would it have been to use a real location?

No palm trees in Memphis, either. I don't mean to piss on a great story, but little things like that bug me. Palm trees?