All-Out Living! With The Viking Commando!!!!


Three months late but here, nontheless! Kids, it time for another edition of.... 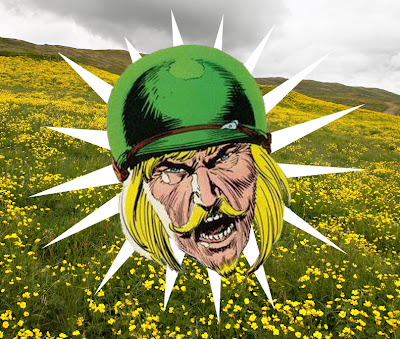 What's a good way to let your roommate know they need to help out more with chores, that won't lead to awkward tension between the two of you?

Next, awaken your village by singing a song full of plunder and one's testicular roundness and virility. Have the village children make torches, light them and have them form a circle just..."yay-big." Gather your roommate (by force if necessary,) bind his palsied wrist to yours with a leather strap, preferably one your father used to beat you with and have an all-out ax fight.

Hit him in the head with sharpened ax.

Awkward tension becomes that feeling in your wrist as you haul his body back to the kitchen to get yourself some of last night's salted pork.

Viking Commando, Why haven't you made a comeback yet? I mean, Sgt. Rock just had that limited, and Enemy Ace and Unknown Soldier have done stuff at Vertigo, so aren't you about due? If Balloon Buster gets a prestige special before you, I will lose all faith in god and man.

Have you seen the state of comics lately? I have no desire to "come back." Come back to what?

A world that doesn't inherently appreciate the genius of my being a Viking who is very much a Commando. I volunteered for duty in scribe Frank Miller's Holy Terror, Batman! comic, only to be told by DC Comics they thought I'd be in their words, "a bit much, even by our standards."

That is the reason I won't come back. Without me, no one will know how utterly ridiculous this book will be.

There is your "balloon buster."

Viking Commando, This weekend all my friends have made some time for pillaging and plundering the village one county over. However, my wife has reminded me that the lawn needs mowing. What should I do?

Hagar? Is that you again? Be a man. Have the damned boy do it. Go and raid your England!

Viking Commando: I'm considering doing something with my investment portfolio. Despite the continued gains in the Dow Jones, I'm getting a bit nervous that the worm might turn soon and we could see a massive downturn. Should I move into safer short-to-medium term deposits, or do you think I'm wrong and I should remain in stocks, corporate bonds, and maybe even expand into something like futures?

The worm does often turn in all matters financial. I ask, what lies in your future? Planting within a wife's womb a Viking of stout heart? Then, I suggest short-to-medium term deposits. If that is the case, that is the safer way to go, I think. This tact will prove safest. If this works out, test the market with a few low yield bonds before investing too heavily.

If that fails, invest in a sack and steal some gold.

Dear Mr. Commando, I have lost the taste for battle. I no longer yearn to feel the warm spray of my enemy's blood splash against my skin or smell that deliciously smoky blend of burning wood and human flesh. In the past, I would have shared my feelings with my friend Barry, but the last time I sought your council, you advised my to cut out his tongue, which means he is no longer speaking to me. I tried discussing this with a wise man who had made a study of the ways of the warrior's mind, but I became so confused by his use of words such as "existential" and "ennui" that I had no choice but to sever his head from his body and slaughter his wife and children to ensure that his bloodline would never again be able to mock me for my lack of an education.

So, I now turn to you, Viking Commando, whose wisdom I admire and whose judgment I respect. What can I do to rebuild the bloodlust that is the trait of every true warrior? And if it involves pills, can you suggest a wise man who can provide me with a prescription without causing me to fly into another fit of murderous child-killing rage?

P.S. Gail will show us the way!

Your lament reminds me of a story: Once, the god Loki made a wager with dwarves. The wager was so that if Loki lost, he would have to surrender his head to the ax of a dwarf. Loki lost this bet and in time the dwarves came to collect their debt. A god prince's head. Loki gladly submitted to the fact that the dwarves were owed his head but in no way could they claim any right to any part of his neck. Loki and the dwarves debated long into the night.

Although, the dwarves did sew his mouth shut...

What was your question again?

As for "gail," that can only be found in the lamentations of the womenfolk.

...and so ends another edition of "All-Out Living! With The Viking Commando!"

*Thanks to James Rambo for the Photoshop help.

Comments:
I really hate it when someone posts something this good.

I'm left trying to explain to my co-workers why I am doubled over at the desk. I'm running out of explanations that "researching a new technology for a client" really does yield that much laughter.

That parable about how Loki negotiated his lost wager with the dwarves got me thinking... would Loki be the god of lawyers, if lawyers had existed in his time? Because his "neck" defense would make Alan Shore weep tears of joy.

Gosh, that was heartwarming. If only Viking Commando could come over and get my kids to clean up their messes in the kitchen!

Thank you for sharing your wisdom Viking Commando!

I'm sorry, Viking Commando, but I have found a counselor far more savage and merciless than you. I have it on good authority that he begins each day with the ritual sacrifice of a toddler and routinely drinks mulled wine from the skull of a beautiful maiden who killed herself after he rejected her physical advances.

They call him Dr. Phil and he's Oprah approved!