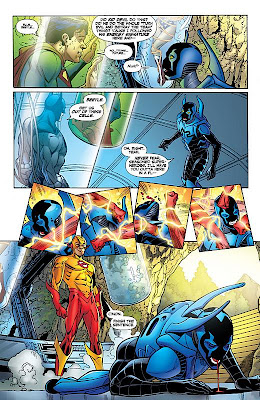 Tomorrow's Teen Titans #52 is being drawn by one of my favorite artists, Jamal Igle.

I had NO idea.

In the "House of Seven Hells!" this man's name on a cover is an easy sell.

Month in, month out, he's been delivering with quiet reliability.

There's no guessing with this man's artwork. His character's are "on-model." He renders a hand as a hand. His characters express themselves with their hands. A face expresses the writer's full intent. His characters occupy their own space and interact within each others.

Best of all, he's constantly looking for it, a new way to lay out a page, a new way torender a subtle something unique to the way character carries him or herself.

It's a certain something that can't be taught and Igle's art has it in abundance.

His art lets me know exactly what's going on on the page. His art makes me want to turn the page and go back and look at it again.

That's makes for a good comic and Igle does nothing but.

Though I haven't met him, Jamal comes across on the internet like a really cool, really nice guy. He posted on ComicBloc about his wife and how they met, and he seems like such a nice, down to Earth, regular guy.

Then there's the fact that his art rocks. I miss him and Stuart Moore on Firestorm, because, as Decon said, he really did bring his "A" game every issue.

It's been awhile since I took 40 minutes to read a book and spent time ogling each panel. This one did it for me.

There were lots of little touches that really made it enjoyable