Hunt down former allies who disagree with said laws: CHECK!

Imprison former friends if they disagree with said laws: CHECK!

Become head of espionage group to make it just that much easier: CHECK!

Create clone of a Nordic god and set it against your former allies: CHECK!

After Norse clone kills a two-story tall Black man, assign someone to dig a hole for said man, have him wrapped in a tarp, buried in chains in front of his whole family: CHECK!

Arrest best friend, Captain America, march him like a dog, handcuffed in front of a mob and not allow for his being possibly killed: CHECK!

Do so while completely sober: CHECK!

Kind of impressive when you see it all in one place, don't you think?

Congratulations, Tony... without even hardly trying, you became a better villain than I ever could hope be.

All I've done lately is try and get elected mayor of Sub Diego. 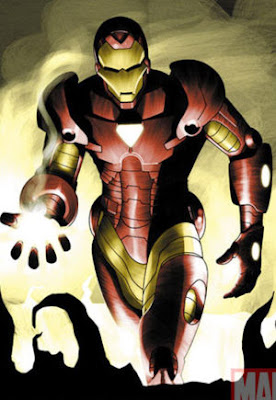 Comments:
What's impressive is that Tony's rocketed up to number two by being a douchebag in the shortest amount of time (or issues) in comparison with the rest of the list.

Therefore I submit to you that Tony Stark's douchebaggerdness is more powerful than any challengers.

Or fresh out of a Lazarus Pit.

Wow, Marvel's beating out DC on the douchebagometer to the tune of 3 to 1 so far.

Is that a good or bad thing for the House of Ideas?

I am having trouble imagining a bigger douchebag than Tony Stark. I defy you to find someone douchebaggier. DEFY YOU.

I was so sure that Tony Stark was going to be Numero Uno Douche Bag. In that case, you're going to go Real World on us and say GWB, aren't you?

If we're going to go real world douchebags, how about the roughly 50% of America that loves GWB? Any analysis of this craptastic period in American history needs to take into account a public that (I am convinced) is half-aware of the staggering levels of BS, but doesn't mind just so long as they aren't the ones getting screwed over. Which, I suppose, is no different from any other civilization at its apex of power.

Oh Fudge, I was going to have ol' Tony as #1 in Douchebaggery! He makes the Red Skull look like a Kindergardener!