Coming in two short days!
The 2006 "Seven Hells!" Year End Issue.
Like Superman, it will burn you with a cigarette.
# posted by Devon Sanders @ 3:02 PM 2 comments

Ten Heroes To Liven Up Your Holiday Party: Madame Xanadu 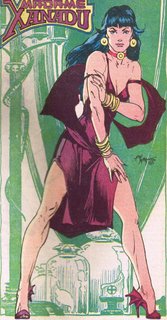 Scip: Oh, my. Why's she wearing a blindfold?

Me (drunker, breaking a champagne bottle over the edge of table) : I think she's blind. I didn't ask.

Scip: Is she wearing a purple lame' off-the-shoulder dress?

Devon: Ummm, a card trick or a fortune. I can't tell anymore.

Scip: So, you brought a blindfold-wearing, off-the-shoulder-purple-dress-wearing, fortune teller to my party?

Me (grabbing Killer Moth my the antenna) : GIVE IT! Yup. 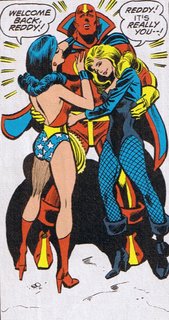 Of course they miss Red Tornado. What's not to love about a superhero whose powers come from below his waist?
# posted by Devon Sanders @ 9:26 AM 1 comments

Ten Heroes To Liven Up Your Holiday Party: Mary Marvel 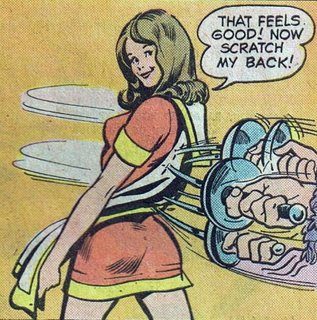 Can we all agree that if we threw a party, we'd want Mary to be there?

Ten Heroes To Liven Up Your Holiday Party: Jonah Hex

It all started out innocently enough. A "Player's Ball." A gathering of "gangsta rap's" best and brightest. A gathering of pimps, wanna-be pimps, hoes and wanna-be hoes.

No one's quite sure what happened in these doors behind me but one things for sure, the undertaker will be doing a brisk busy over the next few days.

What we do know is this: There was the usual talk of pulling out "the gat" and "shootin' the club up," but reports confirm it was all pretty much talk. At some point during the night, survivors reported a blinding flash of light and one lone man, stumbling from its wake. This man, reportedly, had a gun but did not immediately shoot it. Someone resembling Superboy was reportedly seen in the area inexplicably hitting things. 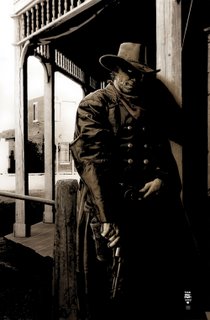 Reports vary but many said he simply went to the bar, ordered something with some "fire" to it and was, for some reason, given a drink with an umbrella in it. Words were exchanged, the next, many were dead.

His one outstanding facial features is his only having half of his face. The shooter is said to be armed and spectacularly dangerous. If you see him, do not approach him, contact the local authorities.

The club has never been quite as shot up as it was on this very night. Now, back to Jack Ryder in the "You Are Wrong" studio. 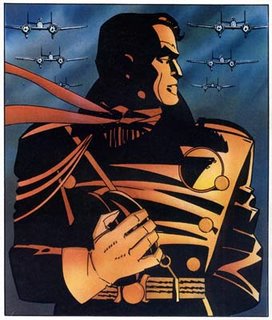 Now, All We Need Is The Champagne...

So...what sometimes takes the place of a white dwarf star after it collapses? 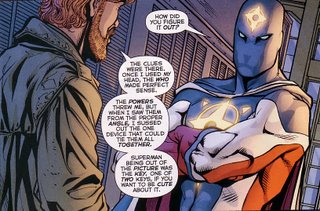 Ten Heroes To Liven Up Your Holiday Party: Sargon The Sorceror

It's that time of year: time for the dreaded annual Christmas Party.

Larry in "Accounts Payable" has been dying for this day. It's the one day he justify even being in the proximity of Sheila, the leggy blonde with the "pow-pows" in "Human Resources."

There he is again, smiling in her face as she laughs, nervously, eyes darting across the room, looking for someone... anyone to save her as Larry with a plate full of garlic-y finger foods in hand, re-enacting scenes from the movie "Happy Feet."

At this moment, there are no heroes.

To Larry, this moment containing finger foods and pixelated penguins is as close to dinner and a movie he'll ever get with this woman, Sheila and dammit... he's gonna savor it. 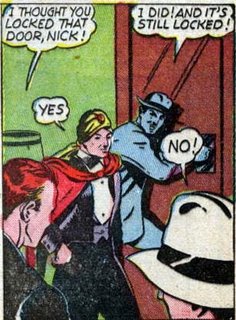 Sargon The Sorceror is a hero.
At this moment, Sargon strides into the party, smelling of lavender, handing his red crushed velvet cape to the very first Black man he sees.

Sargon carefully, slowly takes measure of the room, points at Larry. Larry, with a look of terror flees, never to be seen again.

Sargon gathers his cape from the CEO, bowing gently at the waist, cocking his head, knowingly, towards the lady and in a puff of purple haze, exits.

They have all been changed. Everyone in the room resonates with the knowing.

They have all beared witness to a White man in a tuxedo and a jeweled turban...
...and his pulling it off.
They have all been witness to... absolute sartorial elegance.
# posted by Devon Sanders @ 5:58 PM 2 comments

Pay No Attention To The Rainbow-Flavored Unicorn In The Corner

I haven't been posting much lately.

That will be changing.

I kinda got busy with other things. Something kinda cool. When and if it gets approved, you'll be the first to know.

In other news, December not only saw the return of Lady Cop to DC Comics but it also saw, after a nearly 20 years from The DCU, the return of S.T.A.R. Labs' resident expert on science, pumps and mini-skirts, Dr. Jenet Klyburn. Look for her in this month's JSA Classified #19, treating the wounds of many of many of The DCU's cast-off 90's heroes in what amounts to the DCU version of "The Island of Misfit Toys."

Elsewhere in the blogosphere, I've been reading a new-ish (To me, anyways.) blog, Comics Fairplay. If you want to find comics angst, don't go there. This lady seems to genuinely enjoy the comics medium and on days when I think I don't, I stop by to remind myself that I still do.

And then, I have a question (via Scip) :

"If Jericho's body has been regenerated whole, then shouldn't he be able to speak?"

"Is anyone else having problems updating on blo.gs?"

That's it for the day. Be here next week as I've got three words for you... 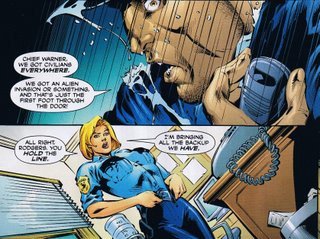 Could you all leave for a moment? I need to speak in private to... I can hardly believe I'm saying this... Ivy Town Chief of Police, Liza (Lady Cop) Warner.

God, where does one start? 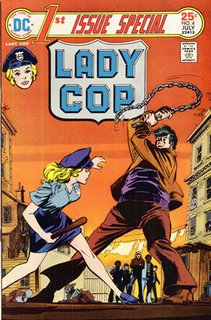 I'll never forget the first time I saw you hanging out in that dollar box. There you were, Surrounded by New Guardians and Breaches. You didn't have to say anything. You said all you had to say on the cover of First Issue Special #4. There you were cocking back, ready to clock someone in the head with a billy club.
I knew you were coming home with me. It was at that moment that I knew my life was changed.

When I opened up FIS #4's pages and saw you valiantly struggling with other people's VD, while fending off would-be rapists and dockworkers.

I knew how special you were. Hell, it even said so in the comic's title.

And yet, no one else knew.

There you were in All-New Atom #6, wearing pants.

With your experience syphillis and law enforcement and from reading the previous five issues of ANA, I just know you're going to fit in just perfectly.

Chief Warner, I... I just want you to know how proud of how far you've come. You've always been destined for greater things. All it took was someone to recognize it. You're going to be OK. You're in good hands.*

All I'll ever ask of you is this: When you find find yourself looking out across the expansive reservoirs of Ivy Town's Sewage Treatment Plant, I hope you'll remember how special you are. Remembering always that you're part of The Creator's (Bob Kahnigher) vast and wonderful plan.

and SHAME was a whole lot of fun. Now, let's cover... GLORY!

Did you stand in the rain, sleet and hail for a sketch for a specific artist?

What's your most treasured comic-related memory?

What's the pride and joy in your personal collection? 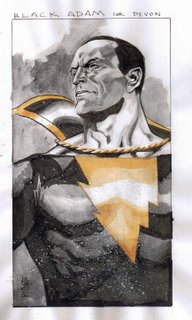