27 Things Right (Again or All Along) With The DC Universe

After reading this, I was inspired to list 52 things right with The DC Universe. Here are 27.

4. Dick Grayson and Barbara Gordon are the same age now.

5. No matter what the 80's might have shown you, keep it that Batman & Dick Grayson actually like AND respect one another.

6. John Constantine's last DCU appearance was in a Kyle Rayner comic. There's something beautiful and pathetic going on there.

7. The occasional Swamp Thing reference. Used sparingly, it makes the DCU just that much weirder.

8. Jason Rusch's Firestorm. Shows you what Firestorm could have been if Ronny Raymond cared.

10. Don't change the fact that Mon-El planted the seeds that led to The United Planets. It's one of the most brilliant pieces of retconning ever conceived.

11. The Sinestro Corps. The Green Lantern Corps should have an evil equivalent.

13. Mr. Terrific's constant referencing of himself as "The Third Smartest Man In The World." It keeps him humble even though in our hearts, we all know better.

14. The Brave and The Bold. The DCU is a HUGE place. There should always be a team-up title.

15. Batman's treatment of a teenaged Blue Beetle in The Brave and The Bold #3 showed him as a father who also happens to be Batman. Let's have more of that. 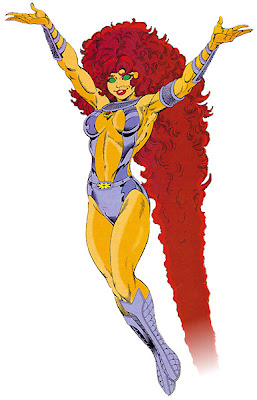 15. Keep Starfire in space. She works great as DC's Barbarella.

16. Taking Sgt. Rock away from Vertigo and putting him back where he works best, in the DCU Universe.

17. Big Barda's nonchalance concerning her husband's current "death." She knows that cheating death is what he does so, why worry?

19. People in The DC Universe get to smoke cigarettes.

21. After two stints in The Teen Titans and one in The Freedom Fighters, Damage is where he belonged the whole time: The Justice Society of America.

22. Rebranding classic DCU titles. The name "Showcase Presents" being used as a banner for classic black and white reprints, "Who's Who in The DC Universe" becoming a toy line, "Secret Six" repurposed as a rag-tag team for "forgotten" & "lost" super-villains. Rebranding gives these classic titles new life while maintaing a sense of nostalgia.

23. Having every Justice Leaguer takes an oath on the cloak of the DCU's first costumed hero, The Crimson Avenger.

24. In Robin, Cassie Cain, the former Batgirl, is still crazy.

26. Jonah Hex, in the past, remembers the future.

Hey, kids! Add your own!

Comments:
27. Jade is dead in the regular universe, and the alternate universe where she lives is the one with no Kyle Rayner.

28. Manhunter is still being published.

31. The Justice Society of America is the greatest super-team in the world (fictional and non-fictional).

32. Courtney Whitmore is the true heir to the Starman legacy, even though Thom Kallor (Have they called him Danny Blaine yet?) carries the name.

33. There's no character who can't be used in new, interesting ways - the rebirth of Egg Fu, Lady Cop as the Ivy Town chief of police, etc.

34. The rebirth of interest in the multiverse and/or various alternate continuities of the past have led DC to open the vaults and republish stuff no one ever expected would see the light of day again (though still no Sugar & Spike collection, dammit).

As long as there is an Earth-3 with a fully restored Crime Syndicate, I'm happy!

35. Jericho is back from the dead

36. Dawnstar is back from ret-con oblivion!

39. The Atom legacy passed on not to Ray Palmer's son, not to a student...but to his Pen Pal. That's a Silver Age concept if I ever heard one.

40. Batman will always have a giant penny in the Batcave. And, yes, it will come in handy!

I actually have always liked the fact that Barbara is significantly older than Dick, simply because it's something you don't see all that often.

What are you drawing your Jonah Hex refernce from?

41. We may be getting the *real* Suicide Squad back.

I actually preferred it with Dick Grayson NOT having been adopted by Batman. The scene at Donna's wedding, if I remember correctly, where Dick brought up that fact was a great moment. Somehow it made Batman more human that, at that point in his life, he wasn't mature enough to make that commitment to his legal ward. I don't know, I guess I just like seeing characters actually develop over time.

42) Paul Dini writing Detective Comics! And in that vein, Riddler trying to go legit as a detective (and being good at it), yet he's still not a "good" guy.

You know, I've always wondered if Bruce held any enmity towards Alan because he left the city unprotected when he departed.

Has the Alan Scott/ decline link been drawn explicitly? Where? I agree that it's a nice thought, but I don't remember seeing it spelled out.

I dug the fact that what killed The Question wasn't a criminal, but cigarettes.